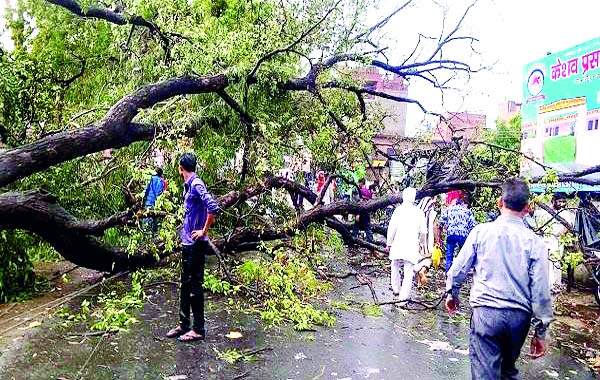 New Delhi, The Southwest monsoon has set in over Kerala on Tuesday, three days ahead of its normal date, Indian Meterological Department (IMD) said on tuesday. ‘The Southwest Monsoon has further advanced into remaining parts of southeast Arabian Sea, Comorin – Maldives area, entire Lakshadweep, most parts of Kerala, some parts of Tamil Nadu and some more parts of southwest, central and northeast Bay of Bengal,’ IMD said. The IMD said,’Conditions are favorable for further advance of Southwest Monsoon into some parts of central Arabian Sea, remaining parts of Kerala, some parts of coastal and south interior Karnataka, some more parts of eastcentral and northeast Bay of Bengal, and some parts of northeastern states during next 48 hours.’ ‘There is a widespread rainfall occurred over Kerala, during the past three-four days. The 14 rainfall monitoring stations for Monsoon onset over Kerala have reported more than 60 per cent rainfall from May 25,’ the IMD said. In its forecast , the IMD saidf,’an east-west shear zone runs roughly along latitude 120N at 3.1 km above mean sea level. A well marked low pressure area lies over southeast and adjoining eastcentral Arabian Sea off north Kerala- Karnataka coasts.Another well marked low pressure area lies over eastcentral and adjoining northeast Bay of Bengal. Lightning claims 23 lives in Jharkhand during last 48 hours Ranchi: Incessant rainfall coupled with lightning and thunderstorm has claimed the lives of 23 people in the state during the last 48 hours. On Sunday, lightning and thunderstorm had claimed lives of 10 people across the state while the numbers rose to another 13 yesterday taking the over all figure to 23 panning across the last two days. During this period, the state also witnessed wind speeds reaching 40 to 50 kilometers per hour which caused uprooting of trees and electricity pole due to which power supply was crippled in the state. In Ranchi district, three people lost their lives while in Chatra four people were killed. Similarly deaths due to lightning were also reported in Ramgarh, Hazaribagh, Latehar and other districts of the state. Scientists at the local MET office said that till May 31 Jharkhand is expected to receive rainfall coupled with thundering and lightning however during this period the wind speed is not expected to reach much strength. 19 killed in various districts of Bihar due to hailstorm and lightning Patna: At least 19 people were killed and several injured following hailstorm, strong wind and torrential rains in Bihar’s Gaya, Aurangabad, Katihar, Nawada and Munger districts late last evening. Principal Secretary (disaster management department) Pratyaya Amrit today said that maximum five deaths were reported due to hailstorm and torrential rains in the district of Gaya. Similarly, three people lost their lives due to the these reasons in Katihar district. He said that five people were killed due to lightning in Aurangabad district, four in Munger district and 2 in Nawada district. Sources said one person each sustained burn injuries in the districts of Munger and Gaya and had been admitted to local hospitals. Several other people were injured across the state due to hailstorm, strong wind and torrential rain. Condoling the deaths, Chief Minister Nitish Kumar directed the authorities concerned to pay ex-gratia to the next of the kin of the deceased and also make proper arrangements for treatment of the injured. Thunderstorm kills 15 in UP Lucknow: At least 15 people were killed in a thunderstorm that struck Uttar Pradesh twice within the past 24 hours, leaving a trail of destruction. Winds with velocity of over 80 km per hour swept the state first on Monday evening and then today morning uprooting trees that smashed houses in which ten people were killed. Most of the deaths were caused by falling of trees and buildings collapse, an official said. The devastation was particularly severe in Unnao, 40 kms south-west of Lucknow, the state capital where six people died. Officials said here on Tuesday that 15 people died and ten others were injured in the thunderstorm that struck the state on Monday evening and Tuesday morning. The injured have been admitted to the different hospitals.Among the victims, 6 died in Unnao, 2 each in Rae Bareli, Gonda, Bahriach and Kanpur and one in Barabanki. Majority of the deaths are due to house collapse as so far there are reports of seven house collapse. “The intensity of the storm was so high that trees were uprooted and fell on buildings flattening them. People who were inside the house died instantly.