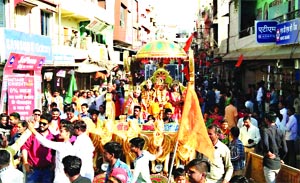 Chronicle Reporter, Bhopal Ram Navami was celebrated with traditional gaiety and enthusiasm in the city and other districts of the state mark birth anniversary of Lord Ram on Sunday. According to Shri Ram Mandir Trust general secretary Om Mehta, the main function was held at city’s ancient Shriram temple situated at Gurubaksh ki Talaiyya where thousands of devotees participated in ‘Mahaarti’. The dignitaries who performed the aarti and special worships included former chief minister Babulal Gaur, BJP district president and MLA Surendranath Singh, Vishwamitra Sharma, Pt. Om Mehta, BDA Chairman Om Yadav, former MLA Ramesh Sharma ‘Guttu’, Pt. Sanjeevan Dubey, Mandir trustee Mahendra Kumar Arora, Omprakash Chhabda and others. Various rituals including ‘Sunderkand Paath’, ‘Panchamrita Snan’ and special hawan and worship were organized. Noted bhajan singer Karuna Chauhan presented bhajans. A procession was taken out in the city with various vehicles mounted with pictures of Lord Ram having his bow and an arrow, accompanied by goddess Sita, Lord Hanuman and brother Laxman. Youths were seen in the attires of the god and goddesses. Arrangement of drinking water and that of snacks was made by voluntary organisations at different places. At all Ram Temples in the city special poojas and aarti were offered along with religious discourses of prominent scholars.Marking the birth of Lord Rama ‘Ram Navmi’ was celebrated on Sunday in the entire state, including capital Bhopal, with enthusiasm and gaiety. Special arrangements were made at all the Ram temples across the region to celebrate birth of Lord Ram, where thousands of devotees thronged to perform pooja, aarti and observe fast in respect of Lord Rama. Special pooja was performed at various places in Ram temples in the city.