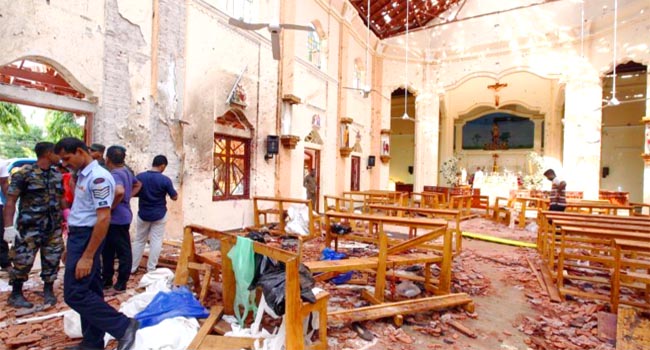 Colombo, Sri Lanka Deputy Defence Minister told media on Wednesday that out of the nine suicide bombers, who carried out massive blasts across country on Easter, one was woman.Ruwan Wijewardene's comment came after police confirmed that nine suicide bombers were involved in the blasts and eight have been identified.It was also revealed that one of them had studied in Britain and Australia, The Strait Times reported. The blasts at hotels and churches have so far killed at least 359 people, including 39 foreigners, the deadliest such event in south Asia's history. Police continued searching homes across the Indian Ocean island nation overnight, leading to the detention of 18 more people.That brings the number of people taken in for questioning to close to 60, including one Syrian. The overnight raids included areas near the Gothic-style St Sebastian church in Negombo, north of the capital, where scores were killed on Sunday, a police spokesman said. An unspecified number of people were detained in western Sri Lanka, the scene of Muslim riots in 2014. "Search operations are going on everywhere, there is tight checking of Muslim areas," a security source said. Meanwhile, police said on Wednesday they carried out a controlled explosion of a suspicious motorscooter parked near the popular Savoy cinema in the capital Colombo. There were no explosives in the vehicle, police said.