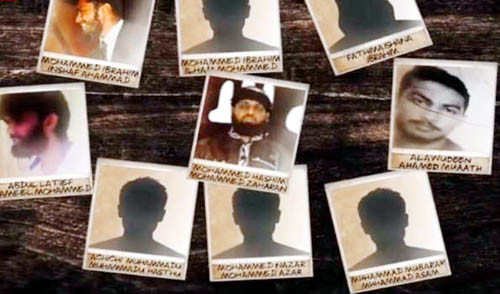 Colombo, The Sri Lankan police has released the identities of all nine people responsible for the devastating Easter Sunday suicide bombings that killed 257 people. The authorities also said that the bombers assets would be confiscated in line with anti-terror laws. Police spokesperson Ruwan Gunasekera on Wednesday confirmed that two brothers from an affluent Colombo family were responsible for the attacks on two luxury hotels. One brother, Ilham Ahmed Mohamed Ibrahim, was identified as one of the suicide bombers who targeted Colombo's Shangri-La Hotel. The second brother, Inshaf Ahmed, was responsible for the bombing of the neighbouring Cinnamon Grand Hotel, New Zealand's news service Newshub reported. The second suicide bomber responsible for the attack on the Shangri-La was named as Zahran Hashim. The Guardian reports Hashim headed the local jihadist group responsible for the attacks, subsequently claimed by Islamic State (IS). Hashim also had a leadership role in the now prohibited National Thowheed Jamath (NTJ).The man who bombed the third hotel, the Kingsbury, was identified as Mohamed Azzam Mubarak Mohamed. Police spokesperson Gunasekera confirmed Mohamed's wife was in police custody. A local resident, Ahmed Muaz, targeted St Anthony's church. His brother has been arrested.Mohamed Hasthun was identified as the bomber of St Sebastian church. The Guardian reports that Hasthun and Hashim lived in close proximity to one another. Local resident Mohamed Nasser Mohamed Asad was identified as the bomber of the Christian Zion church in Batticaloa. Another attacker who failed to detonate a bomb at a separate luxury hotel was named as Abdul Latheef. Latheef went on to set off his explosives at a guest house close to Colombo. The Guardian reports that Latheef had studied in Australia and Britain. The attack on St.Sebastian’s Church, Katuwapitiya was carried out by Atchchi Muhammadu Muhammadu Hasthun from AFC Road Valachchenai. Following the hotel bomb attacks, the wife of Ilham Ahmed Mohamed Ibrahim, Fathima Ilham, detonated explosives strapped to her body. The blast killed her two young children and three police officers who were present at the Colombo home.