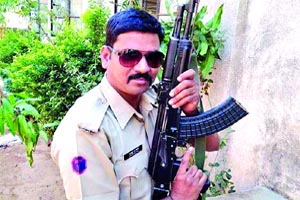 Pune: A jawan of the State Reserve Police Force (SRPF) allegedly opened fire from his service revolver and shot dead three men at two different places, within 10 minutes, in Daund, about 50 kilometers from here. In an incident, the jawan, who has yet to be identified, opened fire on two men at the Mori Chowk in the main square of Daund, killing them on the spot. Within a span of 15 minutes, he again fired on third person at Borwak Nagar and killed him on the spot, police said.Though the motive behind killing of three has yet to be ascertained, police suspect that it could be due to the financial transaction. Following the incident, the Daund Police have blocked the entire road linking the Daund city to nab the culprit, who fled after committing the gory act. Police have launched a manhunt to nab the perpetrator.