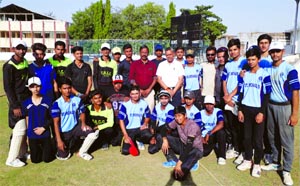 Chronicle Reporter, Bhopal The St. Michael defeated RCC by 42 runs to enter the next round in the inaugural match of the Fifth late Raja Ali Memorial Cricket Tournament. The tournament was inaugurated by Joint Director (Sports) Balu Yadav at local Babe Ali grounds. The programme was presided over by District Sports Officer Jose Chako. Electing to bat first after winning the toss, St. Michael score 134 runs for the loss of 7 wickets in the stipulated 20 overs. Ayush Yada hit brilliant 57 runs off only 47 balls, while Mohit contributed 45 off 30 balls. Prakash and Tausif Anwar captured one wicket each for RCC. RCC had a winning target of 135 runs. But their entire team was all out for only 92 runs off 17.5 overs. Salim and Sanat contributed 21 and 15 runs respectively for RCC. St. Michael bowlers Akash Vishwakarma captured three wickets, while Qasim and Ayush took two wickets each. Ayush Yadav was given Match of the Match award by Joint Director Balu Yadav.