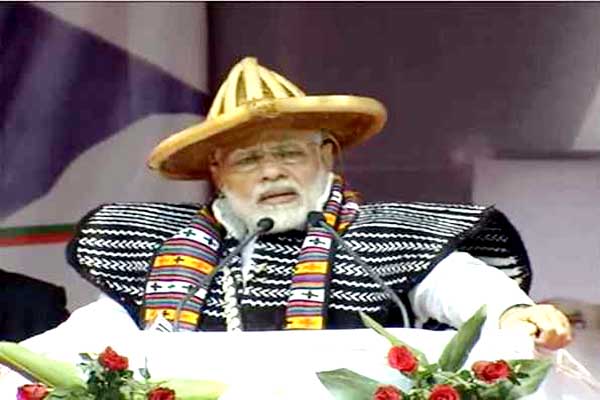 Agartala, Stage is set for Prime Minister Narendra Modi's key election rallies at Santirbazar and Agartala on Thursday with an overwhelming crowd gathering at the Swami Vivekananda ground here. "Looking forward to campaigning in Tripura today. I would be addressing rallies in Santirbazar and Agartala," Mr Modi tweeted.Among the gathering those came in at Swami Vivekananda ground, several voters including women and from minority community said that the public mood in the state is for change and hence everyone seems to endorse the slogan 'Chalo Paltai' (Come, Let us Change)'. "The CPI-M government is last few years turned into a regime of self-seeking leaders as ministers and Left leaders only ensured job for their relatives and children. They simply forgot the common people of the state," said Moinul Islam, a voter from Bordwali assembly segment. Endorsing his views, another voter Asheem Pal, a trader by profession, hoped once BJP government is installed in the state, Tripura will see an atmosphere of booming business. He further said, "The BJP's promise of creating job avenues has attracted me most. I also welcome the assurance given by the BJP that there will be a comprehensive CBI inquiry into the Rose Valley Chit Fund scam". Prime Minister is arriving in Agartala for the second time in a week as he addressed two rallies one at Sonamura and the other at Kailashahar on February 8. The BJP vote share in 2013 assembly polls was near negligible at 1.57 per cent and in 2014 parliamentary polls had hardly risen to 5.7 per cent.However, the saffron party strategists now claim that they have enhanced the party base and will now give a befitting fight to the CPI (M) in their own citadel.