Stand by jawans and Govt, no other conversations', Rahul on Pulwama terror attack 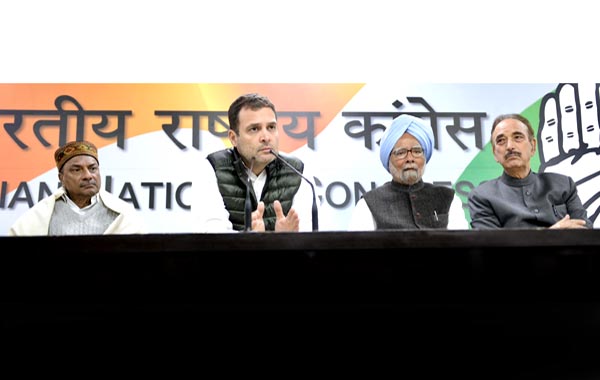 New Delhi, Terming the Pulwama terror attack, in which over 40 security personnel were killed, a 'terrible tragedy', Congress president Rahul Gandhi on Friday said his party and the opposition “will support the jawans and the Government in its actions” and “will not get into any other conversations for the next couple of days”. Addressing mediapersons at AICC headquarters along with former prime minister Dr Manmohan Singh, former Union Ministers AK Antony and Ghulam Nabi Azad, the Congress president refused to respond to the questions on the political controversies triggered after the attack and said “I am hurt and every single Indian is hurt. We will support the government in its actions”. “This is a terrible tragedy. This type of violence done against most important Indians, who are soldiers, who are security forces, is absolutely disgusting.The aim of terrorism is to divide the country. We are not going to be divide a second, no matter how hard people will try, this country and the entire opposition is going to stand together, we are going to stand with our jawans and we are going to stand with the government”, he added. The Congress president added that he is not going to get into any conversation, other than the fact that “our most beloved people have been killed”, “Their families need us and we are going to stand by them”, he said. Mr Gandhi also said that "no force, no amount of hatred or anger can do (even a small amount) to the love and affection our country is built on". The former Prime Minister said that our foremost duty is to convey to the families of those who lost their lives, those who seriously injured that we are with them.” Referring to Mr Gandhi’s words, Dr Singh added that “in condemning the act of terrorism, we shall never compromise the terrorist forces, whatever the country requires, we will work together as one united nation to deal with the menaces of terrorism”. In a worst terror attack, a car bomber rammed bus into a CRPF convey killing over 40 jawans, on Thursday. Hours after the attack, Congress leaders like Randeep Singh Surjewala and Manish Tewari had accused the government over the reported intelligence and security lapses. However, the Congress president insisted that, "this is a time of mourning, a time of sadness, a time of respect".