State advisory committee to be formed for e-waste management 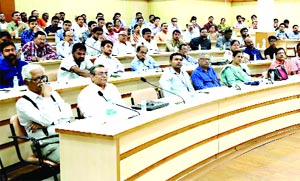 Chronicle Reporter, Bhopal A state-level advisory committee of experts and representatives of academic institutions, non-government and administrative organization will be constituted for e-waste management in state. The committee will advise the Madhya Pradesh Pollution Control Board and government on e-waste management in state from time to time. Principal Secretary and Chairman, Madhya Pradesh Pollution Control Board Anupam Rajan gave this information at a workshop on e-waste management organized by the Board at EPCO. Representatives from prominent academic institutions, banks, government departments and industries took part in the workshop. Well-known e-waste experts gave information about e-waste management and rules and Acts implemented in the state and the country. Rajan said that we will have to worry about e-waste management now so that e-waste producing cities do not have to face challenges in future. He said that owing to over population, India is counted among 5 prominent e-waste producing countries in the world. About 70 percent e-waste is created from computer equipments, 12 percent from telecommunication equipments, 8 from medical equipments, about 7 percent from other electrical equipments, 75 percent from government, private sector besides prominent private companies in the country and nearly 16 percent from domestic use. Mumbai is the biggest e-waste producing city in the country. Member Secretary A.A. Mishra said that Madhya Pradesh Pollution Control Board is the country’s first board that conducts e-waste survey. Mishra gave information about the ban on polythene carry-bag in state and various rules-Acts in state and the country to the participants. If anyone is found manufacturing plastic carry bags, the information should be given to the Board immediately so that action can be taken against him. Plastic carry bags have been banned in state not packaging material. If the commodity is sealed from all sides, it does not come in the category of carry bag. If it is sealed from three sides, it will be considered violation of ban being in the category of carry bag. While former Director of Board Dr. D.D. Basu informed about e-waste related laws and rules, expert Amit Jain informed about situation of e-waste management in the country, state’s e-waste recycling unit head Dr. Fazal Hussain informed about techniques available for Paryavaran Mitra e-waste management and H.K. Sharma on EPR applicable on plastic manufacturers and brand owners under Plastic Waste Management Rule-2016. Director Environment proposed the vote of thanks.