State Govt to bear expenses of education of children of poor women: Chouhan 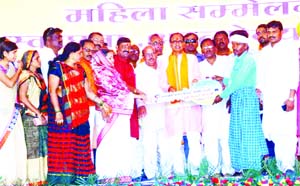 Chronicle Reporter, Bhopal Chief Minister Shivraj Singh Chouhan has said that the state government will bear the expenses incurred on the education of children of poor women from Class I to college. He said that the poor women must send their children to school. Chouhan was addressing the Mahila Sammelan in Palsud in Badwani district today. Chouhan performed bhoomi-pujan and dedicated development and construction works worth more than Rs 200 crore on the occasion. CM Chouhan said that the state government cannot develop the state by itself. Instead the participation of the people is must in it. Chouhan dedicated the newly-constructed community health centre building at Palsud and Silawad and the Chief Minister’s Drinking Water Scheme worth over Rs 6 crore 50 lakhs. He flagged off 3 ambulances. Apart from acceleration of the Rs 169 crore worth 35 km long Thikri-Anjad national highway, bhoomi-pujan of development works of four other roadways was also undertaken. CM Chouhan handed over the house keys to beneficiaries of Pradhan Mantri Awas Yojana. During the Mahila Sammelan, the Chief Minister distributed cheques worth Rs 1.50 crore to 227 women self-help groups of the district. He distributed laptops to 8 disabled students. CM Chouhan announced 7 urban bodies and 3 Janpad Panchayats open defecation free. He distributed free gas connections under Ujjwala Yojana to 7 women beneficiaries at the Sammelan. He also handed over selling rights certificate of minor minerals to 3 panchayats of the district. Animal Husbandry Minister Antar Singh Arya, MP Subhash Patel, Local MLA Diwan Singh Patel and local representatives were present on the occasion.