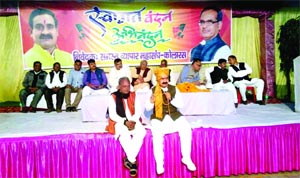 Chronicle Reporter, Bhopal Minister for Public Relations, Water Resources and Parliamentary Affairs Dr. Narottam Mishra said that the state government has taken several decisions in the interest of all the sections of the society besides the development of trade and commerce sector. Dr. Mishra was addressing the Businessmen’s Convention at Kolaras of Shivpuri district today. Dr. Mishra stated that Narendra Modi is the first Prime Minister of the country, who has made India proud in the world. He further mentioned that whenever Chief Minister Shivraj Singh Chouhan tours the area, he always goes amid thousands of people and hear their problems from the helipad till the end of the programme. He also issues directives to the officers for immediate redressal of the problems. MLA Rameshwar Sharma, Former Minister Kanhaiyalal Agrawal, Former MLA Devendra Jain, Virendra Raghuvanshi, Office Bearers of Traders’ Association and other Public Representatives were present on the occasion.