State will develop only when daughters are empowered: CM Chouhan 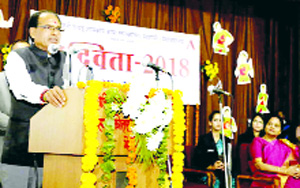 Chronicle Reporter, Bhopal Chief Minister Shivraj Singh Chouhan said that when girls are empowered, the state will be strengthened and will move ahead. Chouhan said that the government is always prepared to protect girls and extend support to them. No hindrance will be allowed to come in the way of the progress of girls. He called upon girls to set big goals and succeed through self-confidence and hard work in which government will support in every step. He said that the new Madhya Pradesh is being built with the support of girls. Chouhan was today addressing the students at “Adwita 2018”-annual function of local Sarojini Naidu Girls Autonomous College. On the schemes implemented for girls the Chief Minister said that women have been given 33 per cent reservation in jobs and 50 per cent in local bodies. Girls are running the administration with their talent. He told the girls to think big, be self-confident, prepare a roadmap to move ahead and with total concentration and firm determination they can succeed. They should make the country proud and bring pride to their state also. He said that girls are not weak so one must always think positively and stay away from negative thoughts. Through a shloka from The Gita he made people understand that one must stay away from ego and be enthusiastic always, work hard and remain unprejudiced in every situation.

Government to get Shubhangi treated

CM Chouhan met student Shubhangi Jain suffering from elephantiasis at the programme. Shubhangi could not walk. The Chief Minister said that the expenses for Shubhangi’s treatment would be taken care of by the government. MLA Surendranath Singh said that state government has done remarkable work for the education of girls. Government is bearing the expenses of education of students in higher education institutes who secure 70 per cent marks. Principal Dr. Manjula Sharma read out the administrative report and gave information about the college’s academic progress. Guests were presented with mementos. Commissioner Higher Education Neeraj Mandloi was also present on the occasion.