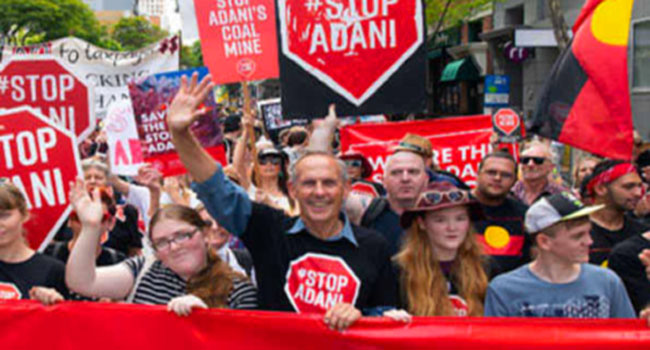 Canberra, Former leader of the Australian Greens, Bob Brown, has arrived here in front of the Parliament House for the Sunday demonstration with his Stop Adani Convoy, which had left Hobart on 17th of April. The Stop Adani Convoy has travelled around 5000 kms up the east coast of Australia with a number of events along the way before it arrived in Canberra for the Sunday rally. "We promised the Stop Adani Convoy would make history and, thanks to the support of thousands of people across Australia, it has," said Mr Brown. "Our convoy, which author Richard Flanagan describes as a 'freedom ride for the climate', has travelled over 5000 km, from Hobart to the Galilee Basin, arriving in Canberra for a grand finale Vote Climate rally on Sunday 5th May," he added. All along the way -- Hobart, Melbourne, Albury-Wodonga, Sydney, Coffs Harbour, Mullumbimby, Brisbane, Hervey Bay, Emu Park, Airlie Beach, Mackay, Clermont, Toowoomba, Armidale and Bathurst -- rallies and events have inspired people to vote for the climate and to Stop Adani, according to "We set out to ensure that climate and the Stop Adani Campaign were front and centre in this election and we have succeeded. But we're not done yet," said the Greens leader. Sunday's rally in Canberra will be a pivotal moment in this election campaign with speakers Bob Brown, Richard Flanagan and music legend Paul Kelly, all speaking truth to power. As Mr Brown has said at every convoy rally, "people can vote for their children's future, or they can vote for Adani's mine." “Our convoy will be a success if voters, on May 18th, have the Adani issue changing their vote,” said Bob Brown, according to the Bob Brown Foundation's spokesperson Adam Burling.