Sufficient cash should be available in banks: Loan system should be transparent 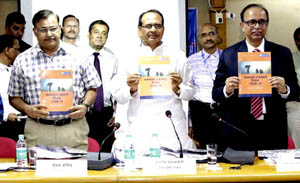 Banks are basis of state’s prosperity and development: CM Chouhan Chronicle Reporter, Bhopal, Chief Minister Shivraj Singh Chouhan said at the 168th meeting of the state-level Bankers Committee that sufficient cash should be available in the banks. Loan of self-employment schemes should be distributed with transparency. Adequate arrangement should be made of payment of pension of social security scheme beneficiaries, MNREGA labourers and the wages of labourers. He said that efforts should be made to increase the number of bank branches in rural areas and increase the Loan-to-Deposit ratio in backward districts of the state. Arrangement of business representatives and mobile banking should be extended. Chief Secretary B.P. Singh was also present in the meeting. It was decided at the meeting that employment fairs will be organised in all districts of the state on coming August 4. The Chief Minister released the year 2018-19 work plan of the committee. CM Chouhan said that the banks are basis of a state’s prosperity and development. Work undertaken in all areas including agriculture, industry and basic development are dependent on banking system. He said that very soon the state government is going to deposit purchase of agricultural produce on support price and incentive of nearly Rs 25 thousand crores in the banks. There should be no inconvenience or delay in providing the amounts approved to farmers and other eligible beneficiaries. Banks should ensure that they have sufficient cash in their branches. The Chief Minister congratulated the bankers for their achievement of 13 percent more than the target in self-employment schemes. He said that easy availability of opportunities of self-employment must be ensured along with loan distributions of the self-employment schemes. This will increase the faith of people in banks. He said that besides youth, self-help groups and micro financing companies should also be included in the fair. There should be system of loan distribution for the beneficiaries of all schemes of the centre and the state in the fair. Chouhan said that bankers should prepare such models that the pensioners of social security schemes and labourers of MNREGA should obtain approved funds easily. He inspired the bankers to create self-employment opportunities focus on Krishak Yuva Udyami Yojana and make distribution of maximum number of loans. He congratulated the bankers for maintaining cash flow of Rs 9,000 crores,generating hike of credit limit by 13 percent in year 2017-18 and by 14 percent in 2918-19 and for hike in Loan-to-Deposit ratio by 3.06 percent more than target. He said that bankers should pay special attention in areas of the state with less than 40 percent Loan-to-Deposit ratio. Executive Director of Central Bank of India B.S. Shekhawat said that the GDP growth rate of Madhya Pradesh was 19.7 percent last year, which is more than the country’s average growth. In this area, the state is in the 8th position in the country. He said that during the previous financial year, the credit distribution has registered an increase of 13.89 percent and deposits have increased by 8.45 percent. An annual plan of Rs 1 lakh 47 thousand 618 crore has been made for this financial year. As per the Reserve Bank of India, the Lead Bank scheme is being improved.Shekhawat has told the bankers to make the Business Correspondent system more empowered.