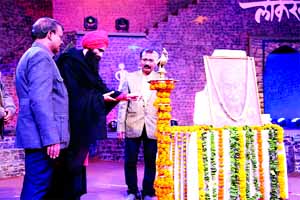 ‘Peer Parai Jaane re...’ organized to pay homage to Gandhiji

Chronicle Reporter, Bhopal On the last day of the five-day Lokrang festival a programme “Peer Parai Jaane re...” was organized on the occasion of martyrdom day of Mahatma Gandhi. On this occasion Punjab’s well-known singer Kanwar Grewal presented Sufi songs. Kanwar Grewal and the chorus mesmerized the audience with the presentation of Sufi songs like ‘Mast bana denge biba’, ‘Ishq bulle nu nachawe yar’, ‘Tumba wajda’, ‘Ticketa do le li’, ‘Meri apdi zameer saudebaj ho gai’, and many others. Kanwar Grewal is one of Punjab’s most mysterious singers whose spiritual music is steeped in Sufi devotion and spirituality. Respected equally for his powerful voice and for his renditions of kalam by Baba Bulleh Shah – Grewal has been a part of Punjabi Sufi music for last few years. Kanwar is mostly known for singing poems by Bulleh Shah and other Sufi poets such as Shah Badakhshi.

A photograph exhibition on “Importance of Snakes in Rituals and Arts” was put up at Lokrang festival 2018. Notably, every year, Lokrang brings something new for Bhopalites, this time an exhibition based on beliefs related to snakes is being displayed and charming the visitors. This exhibition is being exhibited in Lokrang for the first time. Its purpose is to display the importance and traditions of the existing snakes in different tribal traditions. Photographs of Madhya Pradesh, Maharashtra, Rajasthan, Andhra Pradesh, Bihar and Orissa are displayed in the Manirdhar Photograph exhibition of Lokarang. This effort is being done through organizing this exhibition with a view that the beliefs and traditions associated with serpents should not be confined to our ancestors, but the next generation can also be familiar with them and preserve our folk culture. This exhibition is dedicated to the various forms of serpents, their associated ideologies and importance. Event, the beliefs that are connected with Madhya Pradesh is also being displayed at the exhibition. In this exhibition, the existence and glory of the serpent has been kept in mind, the reason for this is that Nag is the only creature which is an important place in all religious beliefs of the world. Nag has also an important place in Hindu mythology, many beliefs about Nag are popular, such as son’s protection, lineage tradition, service spirit, Manglik rituals. On the Panch Panchami, worship of the Nag is worshiped so that he can save us from negative energy and protect the family.