Sunil Arora takes over as CEC , says foremost priority is to give country free & fair elections 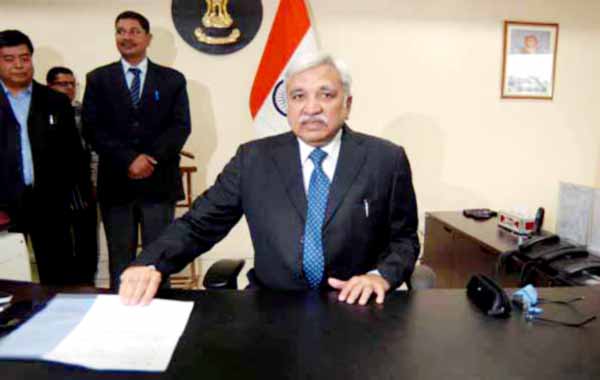 New Delhi, Sunil Arora on Sunday took over as Chief Election Commissioner (CEC) of India and termed holding credible, free, impartial and ethical elections as the foremost priority of the commission. He replaces O P Rawat, who retired on Saturday. Assuming office, Mr Arora said EC's foremost priority is to give the country fair, credible, free, impartial and ethical elections."The Election Commission of India (ECI) has begun preparations for the coming Lok Sabha elections next year, which we are committed to conducting in a free and fair manner. Our first and foremost priority is to give the country fair, credible, free, impartial and ethical elections," Arora said while addressing reporters at Nirvachan Sadan, the headquarters of ECI. The new CEC said the EC was doing meticulous preparation to hold Lok Sabha elections in a free and fair manner."For the Lok Sabha elections, we are making meticulous planning on all fronts including electronic voting machines (EVMs) and the voter-verifiable paper audit trail (VVPAT). We will go for massive dissemination activities about elections and creating awareness among voters through our highly credible 'Sweep' programme," Arora said. On the impact of social media on elections, Arora said that the committee formed by the ECI to review various facets of Section 126 of the Representation of People Act, 1951 under senior Deputy Election Commissioner Umesh Sinha is likely to submit the report by December end. "We will take corrective measures on the basis of the recommendations of the committee ," he said. Sunil Arora, who was appointed as the new Chief Election Commissioner by President Ram Nath Kovind earlier in the week, assumes charge at a time when the poll panel is in the midst of conducting assembly elections in five states The Election Commission will hold the 2019 general election under Arora. Moreover, Assembly elections in Jammu and Kashmir, Odisha, Maharashtra, Haryana, Andhra Pradesh, Arunachal Pradesh and Sikkim are scheduled to be held next year. A 1980-batch IAS officer of the Rajasthan cadre, Arora had been the information and broadcasting secretary, and the secretary in the Ministry of Skill Development and Entrepreneurship. Arora has worked in ministries such as finance, textiles and the Planning Commission.He also served as joint secretary in the Ministry of Civil Aviation during 1999-2002 and the CMD, Indian Airlines, for five years — two years as additional charge and three years as full charge. In Rajasthan, besides district postings in Dholpur, Alwar, Nagaur and Jodhpur, he was secretary to the chief minister during 1993-1998 and principal secretary to CM (2005-2008). A CEC or an EC can have a tenure of six years or hold office till the age of 65 years, whichever is earlier. The convention is to appoint the senior-most election commissioner as chief election commissioner.