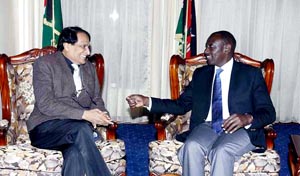 New Delhi, Commerce and Industry Minister Suresh Prabhu met Deputy President of Kenya Williams Ruto on Saturday and discussed with him on various areas of mutual interest to both the countries. Mr Prabhu is visiting Nairobi to attend India-Kenya Joint Trade Committee meeting being held in the African Capital. 'India shares a bond based on cultural, civilisational and business links with Kenya which we would like to strengthen even further,' wrote Mr Prabhu on micro-blogging site Twitter. Kenya is an important trade and investment partner, and a country of special focus for India. 'Given the significant improvement in the ease of doing business in India, Kenyan investors now have a great opportunity to explore India as a trade and investment destination,' Mr Prabhu said. Earlier, Mr Prabhu had also visited Kalyana Venkateswara temple and BAPS Shri Swaminarayan temple in Kenya. 'Offered prayers to the Almighty and later interacted with Indian community present there,' he said in a series of tweets. Mr Prabhu said he received warm affection from the vibrant Indian diaspora in Kenya, who have upheld India's image and also contributed towards Kenya's growth. 'Received warm affection from the vibrant Indian diaspora in Kenya, who have upheld India's image & also contributed towards Kenya's growth. Apprised them on various developmental initiatives and achievements of our Government under the leadership of Prime Minister Narendra Modi ji,' he said. Mr Prabhu addressed the India-Kenya Joint Business Council on Friday in the presence of industry leaders and business representatives from both countries. He also invited Kenyan business to invest in India and urged Indian businesses to research key priorities and design products specific to the needs of the African nation. He also called on Kenyan President Uhuru Kenyatta and held discussions of bilateral and multi-lateral interest on Friday. 'Was a pleasure to call on Mr U Kenyatta, President, Republic of Kenya, earlier today. Discussed many bilateral and multilateral issues of mutual interest and expressed India's support for Kenya's Big 4 priorities,' he said. The Minister also welcomed Kenya's readiness to join the International Solar Alliance for accelerating development and deployment of solar in member countries by inter-govt co-operations, trade networks, investor connect. Mr Prabhu also co-chaired the Ministerial Meeting of the India-Kenya Joint Trade Committee with Peter Munya, Minister for Industries, Trade & Cooperatives of Kenya on Friday. 'Had fruitful discussions with our Kenyan friends on various fields including trade, investment and developmental assistance,' Mr Prabhu wrote. Kenya remains a key market for Indian investors in Africa. Over the years, the Indian Diaspora in Kenya has contributed to its progress. Many Kenyan students have studied in India in the past and influx of students has been growing steadily strengthening bonds of friendship. India is the second largest investor in Kenya. Over 60 major Indian companies have invested in various sectors including manufacturing, real estate, pharma, telecom, IT & ITES, banking and agro-based industries. 'We wish to work even more closely with Kenya to promote mutual growth,' Mr Prabhu wrote in another tweet. Mr Prabhu interacted with various Kenyan dignitaries and Government officials, business leaders, and also the members of India diaspora. 'We would like to promote more trade and business interactions between India and Kenya for mutual growth,' he said.