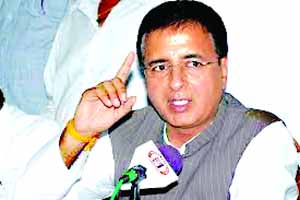 Agencies, Bhopal Senior Congress leader and the party’s national media in-charge Randeep Singh Surjewala today assailed the Shivraj Singh Chouhan Government in Madhya Pradesh over rising atrocities against women. “The number of atrocities against women and girls has increased in the tenure of Mr Chouhan, who describes himself as ‘Mama’. In 2004, the number of rapes had been 2,875. This figure has increased to about 5,000 every year presently. Over 46,300 incidents of rapes were reported between 2004 and 2016,” Mr Surjewala told media here. “Likewise, the number of abductions had increased from 584 in 2004 to 4,904 now. It indicates an increase of over 1,000 per cent. Approximately 8,503 children – including more than 6,000 girls – go missing every year,” he said. He said that power is not available in 29 per cent schools in the state while 86 per cent of these schools do not have computers. Meanwhile, senior Congress leader and former Union Minister Kamal Nath – who was in Chhindwara – today alleged that the Rashtriya Swayamsevak Sangh and the Bharatiya Janata Party are behind the violence in Tripura. “Such incidents divide society and are dangerous,” he said while talking to media at the Imlikheda airstrip.