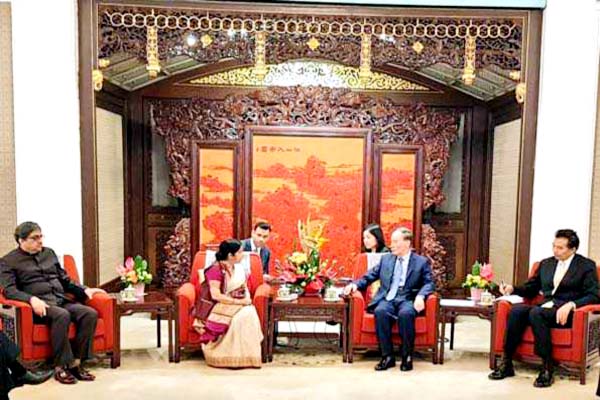 Beijing/New Delhi, Continuing her engagement with the Chinese leadership on the second day of her visit, External Affairs Minister Sushma Swaraj on Monday called on the Vice President of China Wang Qishan at Zhongnanhai in Beijing. The two leaders also held a brief meeting with the officials from both the sides on the sidelines of the Shanghai Cooperation Organisation (SCO) summit. Earlier in the day, Ms. Swaraj addressed an event 'Contribution of Hindi in the Friendship of India and China.’ The Minister stressed upon the importance of understanding the language of both the nations, to overcome communication barriers. Ms. Swaraj also met Foreign Minister of Uzbekistan Abdulaziz Kamilov in Beijing. ``Good exchange of views on enhancing bilateral cooperation in trade & investment, pharma, IT, tourism and culture, as well as on the regional situation,’’ External Affairs Ministry’s official spokeperson Raveesh Kumar said in a tweet. In another tweet, Mr. Kumar said the Minister met her counterpart from Kyrgyzstan Erlan Abdyldaev on the sidelines of SCO Foreign Ministers meeting in Beijing. The two leaders discussed cooperation in trade & investment, IT, defence, films, HRD, culture & other areas, the spokesperson said. In her press statement on Sunday after meeting Chinese Foreign Minister Wang Yi, Ms. Swaraj said they reviewed various aspects of bilateral relations and discussed regional and international issues of common interest. As Prime Minister Narendra Modi will be visiting China on April 27 and 28 for an informal summit with the Chinese President Xi Jinping in the city of Wuhan, she said her discussion with Mr. Wang was to prepare for the informal summit between the two top leaders. ``The meeting in Wuhan flows from the understanding reached by the two leaders last year that India-China relations are a factor for stability in a period of global changes, and have a common responsibility for peace, security and prosperity in the world,’’ she said in the statement. She conveyed India’s appreciation to the Chinese side for their confirmation on resumption of data sharing on Brahmaputra and Sutlej rivers in 2018, as this issue has direct relevance for people living in those areas. Ms. Swaraj also expressed happiness that the Kailash Mansarovar Yatra through the Nathu La route from Sikkim would be resumed this year. The two leaders also underlined that maintaining peace and tranquility in the India-China border areas is an essential pre-requisite for the smooth development of bilateral relations. Her discussions with Mr. Wang also focused on their perspectives on counter-terrorism and collaborative efforts to address other global challenges, such as climate change, sustainable development and global healthcare. Ms. Swaraj is visiting China and the last leg of her visit will take her to neighbouring Mongolia for a two-day visit on April 25.