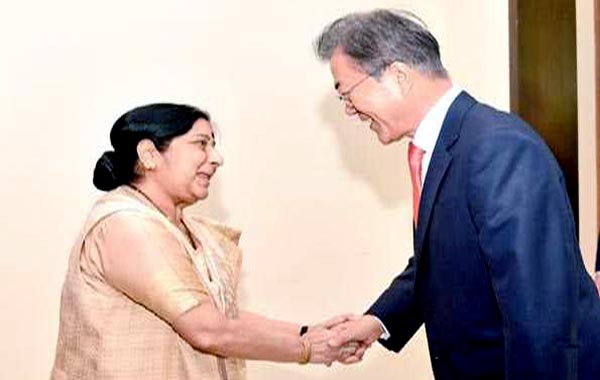 New Delhi, External Affairs Minister Sushma Swaraj called on the visiting President of Republic of Korea Moon Jae-in here on Monday. Both the leaders held positive discussion and further elevating the Special Strategic Partnership by expanding ties across several sectors, MEA spokesman Raveesh Kumar said. "Shared commitment to values of democracy, open society and liberal international order! EAM Sushma Swaraj called on President of Republic of Korea, Moon Jae-in," he tweeted. On the second day of his four-day visit to India, South Korean President along with Prime Minister Modi will visit a plant of electronics giant Samsung in Nodia in Uttar Pradesh. Mr Modi and the South Korean President will inaugurate world's largest mobile phone factory in Noida. Both the leaders will attend the India-Korea Business Forum here and also visit the Gandhi Smriti. The new 35-acre Samsung Electronics facility will be able to manufacture nearly 120 million mobile phones.The company has recently announced a Rs 5,000 crore investment to expand its India operation and double its production. The new unit with a specific target of boosting manufacturing is expected to give a new vigour to Prime Minister Modi’s ‘Make in India’ initiative and to herald a new wave of job-oriented growth. The mega event could hold political significance for Mr Modi's party BJP as elections are due in the states of Madhya Pradesh, Chhattisgarh, Rajasthan and Mizoram and even parliamentary polls in India are not far off. This is all the more crucial as the Modi government has come under consistent attack over the issue of joblessness and alleged decline in the country’s manufacturing sector. After the delegation level talks, a number of agreements are expected to be signed.The visiting dignitary will also meet President Ram Nath Kovind while Vice President M Venkaiah Naidu will call on the Korean President. Mr Moon, accompanied by wife Kim Jung-sook, arrived in the national capital on Sunday. The visiting dignitaries paid a visit to the Swaminarayan Akshardham Temple on Sunday evening. 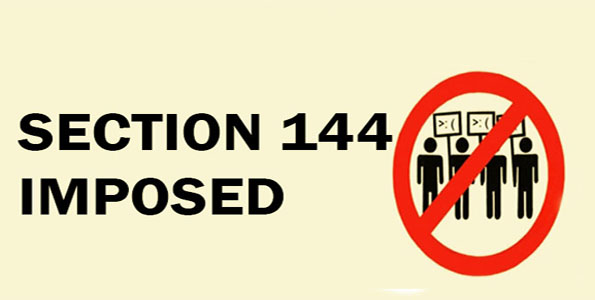