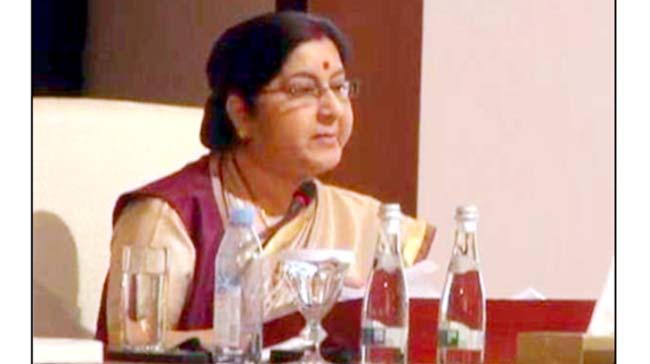 Abu Dhabi, India on Friday crushed Pakistan's oft repeated argument justifying terrorism in the name of religion and told the powerful Islamic members of Organisation of Islamic Cooperation (OIC) that the fight against terror should never be construed as a fight against any religion. Addressing the inaugural plenary session of the OIC and writing herself into history being the first Indian foreign minister to address the OIC meet, External Affairs Minister Sushma Swaraj said the terror menace is destroying lives and putting the world at "a great peril". "In the rich diversity of Southeast Asia, in West Asia, and the Gulf, in North Africa, and Sahel region, in Europe, and North America, in Afghanistan, Bangladesh, and, India, We see the terrible face of terror," she said in the presence of Sheikh Abdullah bin Zayed bin Sultan Al Nahyan, Minister of Foreign Affairs and International Cooperation of UAE. However, Pakistan Foreign Minister Shah Mahmood Qureshi gave the OIC meet a slip after his request to cancel the invitation extended to Sushma Swaraj was summarily rejected by the UAE. "The fight against terrorism is not a confrontation against any religion," she said categorically. "Terrorism and extremism bear different names and labels. It uses diverse causes. But in each case, it is driven by distortion of religion," Ms Swaraj said. In her speech, she send out a strong signal about India's determination to fight terrorism and said global community including OIC must come together to urge states to dismantle the infrastructure of terrorist camps and stop providing funding to such groups. "If you want to save the humanity, you must tell the states who provide shelter and funding to the terrorists to dismantle the infrastructure of terrorist camps and stop providing funding and shelter to the terror organisations based in that country," she said in clear reference to Pakistan. "Terrorism is destroying lives, destabilizing regions and putting the world at great peril.....Our Prime Minister Shri Narendra Modi has often said it is a struggle between the values of humanism and the forces of inhumanity," she said. Ms Swaraj also dwelt at length about India's trade and people to people relations with Gulf region and said - in the past four years, "few relationships have seen as much engagement as India’s relationship with UAE". She said UAE has shown, how a nation can power its progress, if it had a grand vision, it had openness and which had keenness to embrace technology and invest in human resources. On the occasion, she said - India would also like to express special gratitude to Saudi Arabia, Bangladesh and a few other countries for their strong support for inviting India and giving it a space in the OIC. It is for the first time India has been invited by OIC - a forum which has often in the past endorsed Pakistani point of views vis-a-vis Jammu and Kashmir. "We see this invitation (extended to Sushma Swaraj) as a milestone in our comprehensive strategic partnership with the UAE. We also see this invitation as a welcome recognition of the presence of 185 million Muslims in India and of their contribution to its pluralistic ethos, and of India’s contribution to the Islamic world," the MEA said last month. This gesture from the OIC which more often in the past has taken an indifferent approach to India also reflects "India's growing diplomatic influence". Ms Swaraj has been invited by UAE foreign minister Sheikh Abdullah bin Zayed Al Nahyan to be the guest of honour and address the inaugural session. The 46th OIC session this year is being held under the theme: "Fifty years of Islamic cooperation: the road map for prosperity and development", coinciding with the celebration of the 50th anniversary of the organisation. Diplomatic sources said India-UAE bilateral relations have received impetus from time-to-time with exchange of high-level visits from both sides. "The historic visit of Prime Minister Narendra Modi to UAE in August 2015 marked the beginning of a new and comprehensive and strategic partnership. In the Joint Statement issued after the visit, both leaders agreed to work together not only to consolidate achievements in the existing domains but also to explore newer areas of cooperation," the source said. "The friendly country of India has been named as the guest of honour in view of its great global political stature as well as its time-hounoured and deeply rooted cultural and historical legacy, and its important Islamic component," the UAE statement said on February 23.