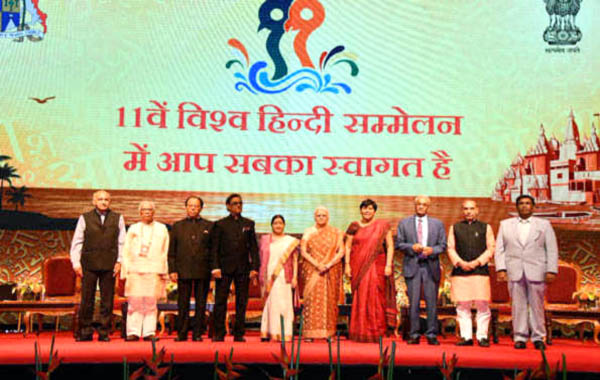 Port Louis, With an aim of developing reading interest and access to Indian vernaculars among younger generation, Government of India is planning to setup Panini language centres across the country. Foreign Minister Sushma Swaraj on Monday while interacting with the representatives of the Indian media at the 11th World Hindi Conference being held here said that with the establishment of these centres, youth would be able to learn Indian languages including Hindi, Telugu, Tamil, Kannada, Malayalam. Ms Swaraj, however clarified that the learning of Indian languages would not be made mandatory and only those interested can join these centres. She described Hindi language as very "polite" and "humble" if spoken properly. "However, the youth of today speak it 'disrespectfully' as they do not have proper knowledge of the language," the minister asserted. However, she said the correct and actual pronunciation of words is necessary to spell the language properly. Ms Sushma reminded the 'low' status of Hindi language prevalent in the country by saying that when the language is spoken in battered form, people do not mock it as they are not well versed with it, whereas this is not a case with foreign languages. Ms Swaraj approves with Hindi language author Narendra Kohli's assertion that any word of a particular language is difficult till not used often. "Difficult and uncommon words of Hindi if used daily, can make the language more meaningful ", she said. When the mediapersons asked about the downfall in employment opportunities in Hindi language, Ms Swaraj replied that it's a myth. "If we compare it with those in English, the job opportunities in fields like media, communications in Hindi medium are increasing,' she asserted. She said that developed countries like China, Japan, Russia and Germany have laid importance on usage of their respective languages rather than English and scaled heights which shows that new horizons can be achieved with one's own language also. Ministry of Human Resource Development Ministry (formerly Ministry of Education) in 1968 has formulated a three-language formula of Central government which emphasised on teaching of "Hindi, English and modern Indian language' (preferably one of the southern languages) in the Hindi speaking states and Hindi, English and the Regional language in the non-Hindi speaking States. Ms Swaraj said that under this formula many Hindi speaking states had chosen to teach a language of the South in their states but the experiment was not successful.