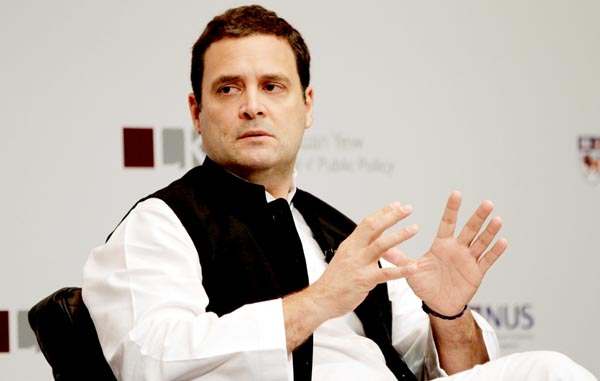 New Delhi, Attacking External Affairs Minister Sushma Swaraj for her statement on Doklam in the Lok Sabha on Wednesday, Congress president Rahul Gandhi on Thursday said the Minister had buckled under Chinese power and betrayed the jawan on the border. In a post on social media, Mr Gandhi said,'Amazing how a lady like Sushma ji has buckled and prostrated herself in front of Chinese power. Absolute subservience to the leader means our brave jawan has been betrayed on the border.’’ In a statement in the Lok Sabha in response to queries by Congress members, Ms Swaraj has said status quo is being maintained since August 27, 2017 when the issue was 'resolved'. "Wahan til bhar ka parivartan nahi hai (There is not an inch of change in status quo on ground)," she added. Speaking in presence of Prime Minister Narendra Modi in the Lower House of Parliament, Ms Swaraj asserted, "I am making this statement in the House with utmost responsibility that the Doklam issue (with China) has been resolved by diplomatic maturity". Responding to Ms Swaraj’s statement, the Congress on Wednesday charged the Government with 'ducking' the 'Doklam Question' in the Lok Sabha. The party said the Modi Government hid behind a sheet of misleading opaqueness on the issue and demanded that the Prime Minister make a statement on the issue and tell about the Government’s policy on de-militarising the Doklam plateau. In a statement issued here, AICC media in charge Randeep Surjewala said, 'Modi Government hid behind a sheet of misleading opaqueness on Doklam today.'