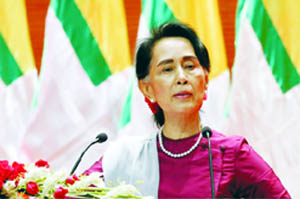 Agencies, Dhaka Myanmar’s Aung san Suu Kye, heavyly criticised for failing to stand up for the Rohingyas, could be held accountable for crimes aganist humanity, says UN Special Envoy Yanghee Lee “For complicity or neglecting to do anything. I am afraid so,” she said in an interview with the UK’s Channel 4 News. Professor Lee agreed with the interviewer that what has happened with the Rohingyas in Myanmar is a systematic targeting and persecution of people.Asked whether there has been an effort to destroy the very identity of Rohingyas, which appears to suggest genocide was occurring, her reply was, “Absolutely.” One has to be legally correct to determine genocide and it has to be through a process of legal procedures. So, therefore, I can only say it bears a hallmark of genocide,” said the UN envoy. The number of deaths in Rakhine violence could be far more what has been reported, she said adding: “More mass graves will be discovered sooner or later because this is something that I have received (information) myself too.” Based on surveys at refugee camps in Bangladesh, the Medecins Sans Frontieres said at least 6,700 people died in violence in a month from Aug 25, when insurgents attacked police camps triggering a military crackdown. The humanitarian organisation’s estimates far exceeded the then Myanmar’s official figure of 400.Asked on her view of Suu Kyi over the situations, Lee said, “Either she is denying or she is really far away moved.” Over the Myanmar leader’s years of reputation of what the interviewer described as “a sort of goddess of democracy and human rights”, the UN envoy said, “She was never a Complicity is also part of accountability, according to Lee.She said that Suu Kyi could be found guilty of what the interviewer said as “very very serious crimes.” Lee had been in the past prevented from going to Rakhine and after the latest exodus of Rohingyas, she has been barred from visiting the country. “Well, they say I was biased and unfair. And every time I asked what was it that I was unfair and biased about, there was no clear answer,” Lee said during the interview. “When I said, well…Rohingyas this and that, the government said ‘We don’t have any Rohingyas’. I cannot accept that in principle. And that’s being biased?” “When I declare that there’s been extrajudicial killing and arbitrary arrests, or rape, they (Myanmar government) would say ‘no we have never done that’.”The UN envoy said the Rohingyas in Bangladesh cannot be safely repatriated under the existing conditions. “I have been stating that unless the discriminatory and oppressive laws against the Rohingya population are dismantled, you are going to see the same things happen again. Even, after they return.” Buddhist-majority Myanmar has treated Muslim Rohingyas like “herding cattle through a small alley”, which has been happening for years, said Lee.“And this is what happened metaphorically and physically to the Rohingya population. They have been herded into a small area, emotionally and physically.“And with all kinds of barriers put on, infringements on their human rights. And where they are at a point, there’s no where to go.”