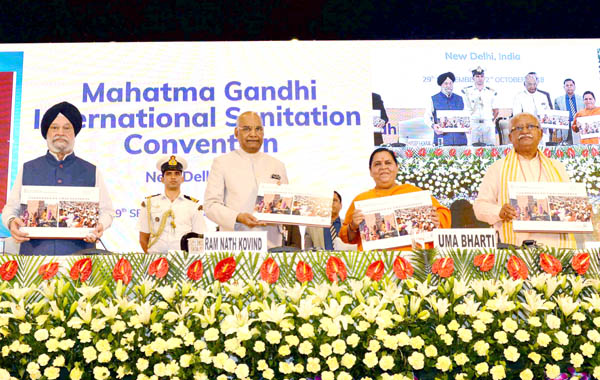 New Delhi, President Ram Nath Kovind on Saturday said Swachh Bharat Mission seeks to create a cleaner India – with more efficient waste management, cleaner public and private places, improved sanitation and universal use of toilets. Inaugurating the four-day Mahatma Gandhi International Sanitation Convention here, the President said Swachh Bharat provides every one of India’s 1.3 billion people an opportunity for a dramatic leap. 'The Mission, the focused sanitation effort and the broader Sustainable Development Goals (SDGs) represent a once-in-many-generations moment. We are that chosen generation,' he said. Addressing Ministers and delegates from 68 participating countries, the President said,' Target 6.2 of the Sustainable Development Goals calls for countries to end open defecation, ensure everyone has access to a basic toilet and put in place systems for safe management of excreta.' He said achieving universal access to adequate and equitable sanitation and hygiene by 2030 is a major challenge in many parts of the world. 'Drinking water, sanitation, and hygiene are central to Sustainable Development Goal 6, especially targets 6.1, 6.2 and 6.3,' the President said. Target 6.2 of the Sustainable Development Goals calls for countries to end open defecation, ensure everyone has access to a basic toilet and put in place systems for safe management of excreta. Mr Kovind said he is confident that the sessions and proceedings of this Convention will result in actionable ideas and in a powerful statement towards 'our combined resolve to achieving the Sustainable Development Goals, and particularly SDG 6.' 'Our successes with Swachh Bharat, our attainments in the sphere of sanitation, our methods and our mechanisms, are available to all of you, to all the friendly countries present here, and others as well, to use as you deem necessary,' he said. In the end, access to improved sanitation is not a target and a goal for one country or the other – it is the interlinked destiny of humankind, the President said. Mr Kovind said, 'According to UNICEF, which has done a cost-benefit analysis of the Swachh Bharat Mission, every rupee invested in improving sanitation will eventually save Indian families and Indian society between four and five rupees.' He said a recent World Health Organisation study estimates that Swachh Bharat would have saved 300,000 lives during the course of the programme itself. In the long run, it will save 150,000 lives a year. 'Gandhiji’s blessings are with us as India strives to eliminate open defecation in its entirety by October 2, 2019. This is the best 150th birthday gift we can give Gandhiji,' he said. The President said as an instrument of mass mobilisation, as a people’s movement, and as a national goal towards which there is near total commitment, 'Swachh Bharat represents for me the spirit of our Independence movement'. 'India has moved ahead with grit, determination and unusual urgency. Swachh Bharat is a revolution playing out in real time,' he said. 'About 85 million rural house-holds and six million urban households have begun to use toilets for the first time. Swachh Bharat has helped them renounce the troubling practice of open defecation,' the President said. 'I am given to understand that 503 of India’s 699 districts have been declared open-defecation free; 3,622 of India’s 4,041 urban local bodies have been declared open-defecation free; and 4,87,445 villages have been declared open-defecation free,' Mr Kovind said. He said the relentless and strenuous labour of the past four years has led India to significant milestones. Sanitation coverage was at 39 per cent at the start of the Swachh Bharat Mission in 2014. Today, the figure is almost 95 per cent. 'Absence of immediate toilet facilities, at home, in the work-place and – perhaps this is most vital – at school, place an unacceptable burden on our daughters. No young girl should have to give up school only because a girls’ toilet is not available,' Mr Kovind said. He said improving access to sanitation and eradicating open defecation have enormous implications. They are critical social and economic investments. It is worth noting that diarrhoea and respiratory infections cause among the highest number of child deaths in India, the President said. 'The absence of a suitable toilet and appropriate hygiene and sanitation practices can lead to life-long disadvantages. Therefore, Swachh Bharat is critical to securing our human capital and our demographic dividend – and to giving our children a better future,' Mr Kovind said. He said On October 2, 2014, the Government of India inaugurated Swachh Bharat campaign to institutionalise modern sanitation systems and remove the curse of open defecation from India. 'Happy to note that it has become a mass movement with domestic and international participation,' Mr Kovind said. 'For Gandhiji, political independence and self-rule were only part of the larger enterprise of human freedom. For him, the dignity of each human life was of the essence. He strived not just for a free India but a better and a just India,' the President said. Whether it is the struggle for ethnic or racial parity – or for civil liberties for ordinary men and women wherever they may be – Mahatma Gandhi is human civilisation’s talisman for all times to come, Mr Kovind said. 'Mahatma Gandhi was an early proponent of the universal right to sanitation. He saw it as intrinsic to the quest for human freedom and dignity for all those who live on our shared planet,' the President said. The President suggested five important themes that countries may choose to adopt while meeting the problem of insufficient sanitation. These are - ensuring people lead the planning, implementation and management of sanitation programmes; using smart and affordable technologies for effective and efficient service delivery; eliminate all forms of inequalities in service delivery; creating innovative financing instruments to fund and sustain the sanitation movement; and develop capacities within the government to plan, implement and monitor sanitation programmes. The Mahatma Gandhi International Sanitation Convention is being organised by the Ministry of Drinking Water and Sanitation to mark the beginning of the 150th birth anniversary celebrations of Mahatma Gandhi, also coinciding with the fourth anniversary of the launch of Swachh Bharat Mission.