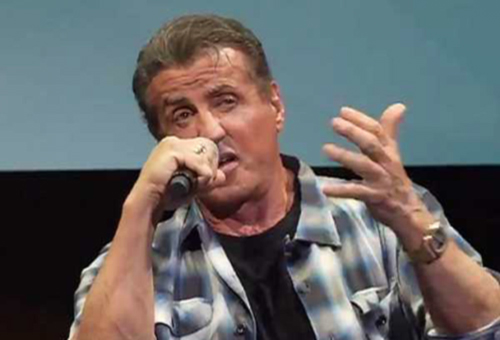 Cannes, Sylvester Stallone didn't need a battle tank to conquer cinema lovers at the Cannes film festival this year.The actor of such blockbuster film series as 'Rocky' and 'Rambo' rode in a tank in Cannes five years ago to promote his film, 'The Expendables 3', along with fellow actors Arnold Schwarzenegger and Antonio Banderas. This time, Stallone only needed his inspiring words to woo the global audience attending the 72nd Cannes film festival. In a special 'Rendez-vous With Sylvester Stallone' session at the festival yesterday, the actor narrated his journey from a struggling actor to stardom. "I was an unknown actor and had some physical flaws making it hard for me to speak because of an accident when I was young," Stallone said. "And the director (of 'Rocky') said what language is that you are speaking," he recalled. "He said I have an accent." "If I have an accent, Arnold Schwarzenegger and I should open a school for speech learners," Stallone joked. Stallone said 'Rocky', released 43 years ago, was an experiment. "I am not a boxer. I had to learn," he said about the film he wrote and won the Best Picture and Best Director Oscars. "We didn't have any money. The year before the film, I was a parking attendant, not that it is any less dignified. We used our own clothes and changed them in the back of a car." Comparing the struggle of his hero in 'Rocky', Stallone said there were "more Rockys today than ever before". "Life becomes more and more complicated and the fight is getting more and more complicated," he added. "Failures make you smart. Success makes you dumber." Stallone said he was the eleventh choice for 'Rambo', which came out in 1982. "The character (of Rambo) was a savage. He became a monster when America rejected him," he said referring to the film that was made a few years after the end of Vietnam war. "It is an interesting story about alienation. Veterans were coming back from the war damaged and there were so many suicides." 'Rambo', he said, was not meant to be a political statement. "It became one," he added. "I am almost a political atheist. I had not voted before (the film)," he said. Stallone introduced exclusive images from the fifth film in the 'Rambo' franchise, 'Rambo V - Last Blood', set for release on September 20, at the festival where a restored version of 'Rambo - First Blood' was premiered in high definition in the Cannes Classics section. In a four-decade-long career, Stallone has acted in 60 movies, wrote 25 of them, and directed eight others. "Never stop punching until you can't lift your arms anymore," he said, while responding to questions about his legacy. "You always have something left to do."