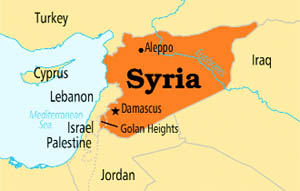 Agencies, Damascus Several people have died or were hurt after a Syrian military airport was hit by missiles, state media said, amid international alarm over a suspected chemical attack on a rebel-held town. Monday’s attack hit the Tiyas airbase, known as T4, near the city of Homs. Syria initially said the West was involved. The US and France threatened to respond to the alleged chemical attack, but deny striking the base, according to a BBC News report. Israel has previously hit Syrian targets. It has not commented. US President Donald Trump said there would be a “big price to pay” after the chemical attack in Douma, in the Eastern Ghouta region, near the capital, Damascus. Meanwhile the last rebel fighters in Douma have surrendered and are being bussed out of the enclave after reaching a deal with the government. Mr Trump and France’s President Emmanuel Macron issued a joint statement on Sunday vowing to “co-ordinate a strong, joint response” to the alleged attack. But US officials said it did not launch a missile attack.“At this time, the Department of Defense is not conducting air strikes in Syria,” the Pentagon said in a statement. “However, we continue to closely watch the situation and support the ongoing diplomatic efforts to hold those who use chemical weapons, in Syria and otherwise, accountable.” France also issued a denial.Syria’s state news agency Sana initially called the reported missile strike on the Tiyas airfield a “suspected US attack,” but later dropped the reference to the US. In April 2017, the US fired 59 Tomahawk cruise missiles at Syria’s Shayrat military airfield in response to a chemical weapons attack on a different rebel-held town, Khan Sheikhoun. We’ve been here before. Almost exactly a year ago, the same horrific images of children choking to death, and President Trump insisting this could not be allowed to stand unanswered. Then, within days the US military fired cruise missiles at a Syrian airfield where the sarin attack had been launched from. So when Donald Trump says there will be a price to pay, it is no empty threat. But this time round, the Russians are warning of dire consequences if the West uses this alleged chemical weapon attack as a pretext to intervene in Syria.