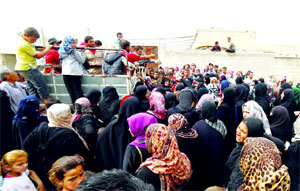 Agencies, Geneva Syria’s war rages unabated despite a fall in the number of besieged civilians, a senior U.N. official said on Thursday, warning of a potential worsening of the conflict in the rebel-controlled governorate of Idlib. U.N. humanitarian adviser Jan Egeland said millions of civilians were still caught up in the seven-year-old conflict and many who escaped battle zones had to seek shelter in overcrowded camps for the displaced in Idlib in the northwest. Insurgent officials say they fear an offensive against Idlib by Syria’s military and its allies Russia and Iran, something humanitarian agencies say could produce civilian suffering on a greater scale than during the siege of Aleppo last year. “We cannot have a war in Idlib. I keep saying that now to Russia, to Iran, to Turkey, to the United States, to anyone that can have an influence,” Egeland told reporters.He called for negotiations to protect the civilians, and said recent air raids in Idlib were a bad omen. The war has been going President Bashar al-Assad’s way since Russia intervened on his side in 2015. From holding less than a fifth of Syria in 2015, Assad has recovered to control the largest chunk of the country with Russian and Iranian help. The Idlib region remains the largest populated area of Syria in the hands of insurgents fighting the Damascus government. Syrians have poured into Idlib at an accelerating rate over the last two years from areas recaptured by the army. Egeland said about 11,000 Syrians are still under siege and two million are hard to reach with humanitarian aid, compared to 625,000 under siege and 4.6 million who were hard to reach a year ago.