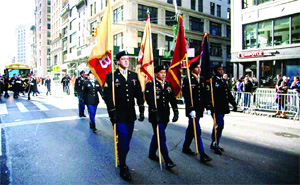 Agencies, Washington President Donald Trump’s dream of a grand military parade through the streets of the US capital attracted scorn, skepticism and even a dash of wit from local officials on Wednesday. Critics argued a parade could cost millions of dollars, at a time the Pentagon wants more stable funding for an overstretched military. “A military parade in DC would shut down the nation’s capital and waste taxpayer dollars just to feed Trump’s ego,” said Eleanor Holmes Norton, a non-voting delegate to the U.S. Congress for the District of Columbia, a Democratic stronghold. US Senator Lindsey Graham, a prominent Republican voice on defense matters, said he favored highlighting the country’s armed forces but not its weaponry. “I think a parade showcasing the military and the sacrifices they make for the country would be appropriate, it would be a way to say thank you, but I’m not interested in a military hardware display. That would be cheesy and project weakness,” Graham told reporters on Wednesday. The White House said on Tuesday it had asked the Pentagon to explore a celebration of “America’s great service members,” after the Republican president marveled at the Bastille Day military parade he attended in Paris last year. Defense Secretary Jim Mattis - who argued to lawmakers on Tuesday that a budgetary impasse was eroding U.S. advantages over adversaries and could lead to aircraft being grounded - said the Pentagon was putting together options that would be sent to the White House. “I think we’re all aware in this country of the president’s affection and respect for the military,” Mattis told reporters, while declining to address the costs of the parade. One option under consideration is for a parade on Nov. 11 - which would be the 100th anniversary of the end of World War One. GENERALLY RARE Military parades in the United States are generally rare. Such parades in other countries are usually staged to celebrate victories in battle or showcase military might.In 1991, tanks and thousands of troops paraded through Washington to celebrate the ousting of Saddam Hussein’s Iraqi forces from Kuwait in the Gulf War.