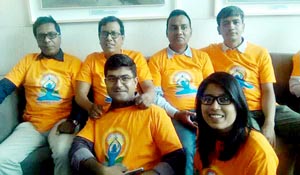 Dhaka, The High Commission of India in Dhaka plans to celebrate this year’s international Yoga Day on June 21 in a big way and has included a lucky draw for the participants. Prizes in the lucky draw include a Tata Tiago car, a Bajaj motorcycle, a holiday package to a destination in India, a trip to Delhi for a couple and a hospitality package for a couple in a five-star hotel in Dhaka. The announcement was made at the curtain raiser on Tuesday in the presence of several Bangladeshi celebrities at the High Commission. The entry is free during the event between 7am and 8am at the Bangabandhu National Stadium in Dhaka. The programme will include yoga demonstrations, and a mass yoga session, apart from the lucky draw. All participants will receive, on a first-come-first-served basis, free yoga mats, t-shirts and gift hampers and a chance to win attractive prizes in the lucky draw. The United Nations proclaimed June 21 as the International Yoga Day on Dec 11, 2014. The resolution establishing the International Day of Yoga was proposed by India. A total of 175 nations co-sponsored the resolution, the highest number for any UN resolution. The day has been celebrated across the world since the beginning. In 2017, there was a record turnout of around 5,000 yoga enthusiasts at the Bangabandhu National Stadium.