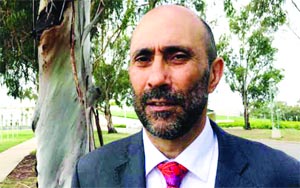 Agencies, Canberra Ten years ago, Aboriginal Australian Ian Hamm welcomed words he had been waiting a lifetime to hear. “For the pain, suffering and hurt of these Stolen Generations, their descendents and for their families left behind, we say sorry,” Kevin Rudd, then Prime Minister, said in Parliament. The apology on 13 February, 2008, referred to a shameful national chapter in which indigenous children were forcibly removed from their families. Mr Hamm was among them. As a three-week-old baby in 1964, he was taken from his Aboriginal family by government officers and adopted into a white community. Tens of thousands of other indigenous children were removed over successive generations until 1970, under policies aimed at assimilation. Mr Hamm said Mr Rudd’s historic apology helped change his own sense of identity. “My country doesn’t argue about me any more — it gave me peace that my story, like so many others, wasn’t a matter of debate,” he told the BBC.“I remember writing out my feelings the day after the speech and I called it: ‘Today is the day I wake up.’” The time has now come for the nation to turn a new page in Australia’s history by righting the wrongs of the past and so moving forward with confidence to the future. We apologise for the laws and policies of successive Parliaments and governments that have inflicted profound grief, suffering and loss on these our fellow Australians. We apologise especially for the removal of Aboriginal and Torres Strait Islander children from their families, their communities and their country. For the pain, suffering and hurt of these Stolen Generations, their descendants and for their families left behind, we say sorry.To the mothers and the fathers, the brothers and the sisters, for the breaking up of families and communities, we say sorry. And for the indignity and degradation thus inflicted on a proud people and a proud culture, we say sorry.An estimated 20,000 members of the Stolen Generations are alive today. Many have described the apology as a watershed moment. “It was a day I will never, ever forget in my life because we were being acknowledged as a group of people,” Aunty Lorraine Peeters told the Special Broadcasting Service. Michael Welsh told the Australian Broadcasting Corp: “It’s made a big difference to me in my life, through my life, where I’ve journeyed.” A landmark 1997 report, titled, Bringing Them Home, estimated that as many as one in three indigenous children were taken and placed in institutions and foster care, where many suffered abuse and neglect. A government-funded survivors group, the Healing Foundation, said it had a “profoundly destructive” impact on those removed and their families, many of whom had carried lifelong trauma. Indigenous Australians, who comprise about 3 per cent of the population, continue to to experience high levels of disadvantage.On Monday, the government released an annual report showing that Australia is failing four of seven measures aimed at improving indigenous lives. Mr Hamm said that much optimism about addressing inequality had not been fulfilled since the apology. However, urged Australians not to give up.“It’s easy to give in to despair and say it’s too hard, but for us, remembering a moment like [the apology] is a boost,” he said.“It’s a breath of air into our lungs to revive you and keep you going.”