Tendu Leaf collectors to get plucking rate of Rs. 2000 from this year: CM Chouhan 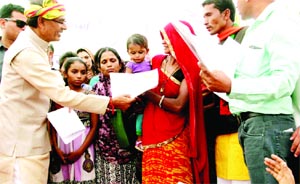 Chronicle Reporter, Bhopal The Chief Minister Shivraj Singh Chouhan informed in Gond Adivasi Sammelan held at Salarod village of Sehore district today, that a proposal to give number 3 status to Gondi language will be sent to the Center. A grand statue of Rani Kamlapati will be installed in Bhopal. Chouhan instructed officers of the forest department to let the tribal come without any inconvenience to the fort to perform pooja-archana. He mentioned that pooja places of Poojya Bada Mahadev will be developed.

Farmers to get additional sum of Rs. 100 on selling gram

CM Chouhan said that gram at the support price of Rs. 4,400 per quintal will be purchased from the farmers this year. An additional amount of Rs. 100 per quintal will be transferred in the bank accounts of the farmers after the procurement. He further informed that an amount of Rs. 200 per quintal in the bank accounts of the registered farmers, who have sold wheat on minimum support price last year will be deposited on April 10 and Rs. 265 per quintal against sale of wheat this year will be deposited in the registered farmers’ bank accounts on June 10. Moreover, he informed that plucking rate has been increased from Rs. 1200 to Rs. 2,000 for tendu leaf labourers from this year. He mentioned that sari along with foot wear besides cold water bottle will be given to female tendu leaf collectors. Urging youth of the tribal community to avail benefits of the self-employment schemes of the state government, Chouhan informed that guarantee against the bank loan will be given by the state government. He urged tribal community to educate their children. They should not worry about the education expenses up to higher education as the fee towards it will be borne by the state government. While urging labourers of unorganised sector for registration under the scheme, Chouhan said that all the registered labourers will be provided with full benefits of state government schemes. CM Chouhan performed aarti of Bada Mahadev in village Salarod. He also took part in Sadguru Kabir Puran and Gyan Yagya at village Ambakadeem and in the conclusion of yagya at Ramanand Ashram at village Vasudev. He elaborated the schemes of Farmers Welfare and Agriculture Development department at both villages during the Jan-Samvad. Furthermore, Chouhan distributed free cycles to students during the sammelan in Salarod. Minister for School Education Kunwar Vijay Shah, Administrator APEX bank Ramakant Bhargava, Chairman Forest Development Corporation Guruprasad Sharma, Chairman Warehousing Corporation Rajendra Singh Rajput, President Jila Panchayat Smt. Urmila Maretha and other public representatives were present on the occasion.