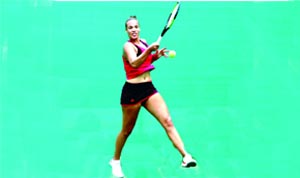 Chronicle Reporter, Bhopal Tennis player Tereza Mihalikova of Slovakia won the trophy of singles match at the $ 15000 International Tennis Federation (ITF) Women’s Tennis Tournament. The semi finals of singles were played between Emily Webley Smith of Great Britain and Tereza Mihalikova of Slovakia here on Saturday at Arera Club court 1. The $15000 ITF Women Tennis Tournament Singles Final started with brief introduction of player to B.P Singh Chief Secretary of Madhya Pradesh and President of Arera Club, Bhopal. He was present as the Chief Guest of the tournament. To begin with the match, the toss was won by Emily Webley Smith (Great Britain) and she chose to receive the serve. Tereza Mihalikova (Slovakia) took the first set and raced to 5-0 points when Emily held her serve and showed her presence in the score board. Tereza held her next game and clinched the set by 6-1 points. Emily started the second by holding her serve and games went on serve till the score reached 4-3 points, when Emily broke Tereza and lead by 5-3 points. Tereza broke back and held her serve and score became 5-5 points. Emily held her serve again broke Tereza to win the second set by 7-5 points. The final set started with Emily being broken in the very first game and Tereza took the full command in the set and won by 6-0 points. Notably, the International Tennis Federation (ITF) Women’s Circuit is a second-tier tour for women’s professional tennis. It is organized by the International Tennis Federation and is a tier below the Women’s Tennis Association (WTA) Tour. The ITF Women’s Circuit includes tournaments with prize money ranging from $15,000 to $ 100,000.