Terror and talks with Pak cannot go together: Sushma 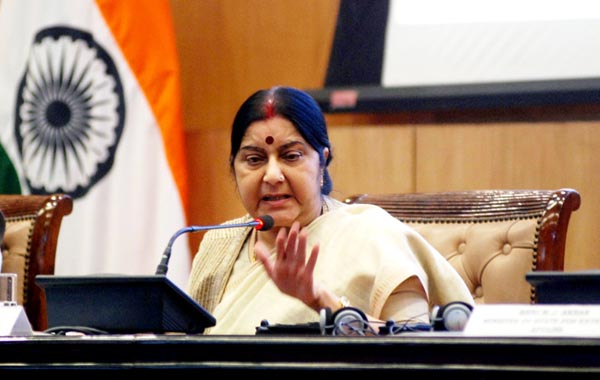 New Delhi, India on Monday asserted that it has "never" discarded dialogue with Pakistan but there has been a caveat always that terror and talks cannot go together. "We have never said there will be no talk. Never ever we have said we are not ready for talks but there is a caveat. Terrorism and talks cannot go together. This has been our position and there has been no change in our position," External Affairs Minister Sushma Swaraj said at her annual press conference here. She also said the formal dialogue with the western neighbour need not be linked to the ensuing elections in Pakistan in July. "We are ready for talks even before elections. But there is one condition Pakistan should give up terrorism....I have said this earlier at the UN general assembly also when Pakistan Prime Minister Nawaz Sharif had put four point formula for talks," she said. "I have made it clear that there is no need of a four-point formula. Let us decide about one point, you give up terror and we can have talks," said Ms Swaraj. During her one-and-a-half hour-long press conference, she highlighted the "unprecedented" achievements of the Narendra Modi government in foreign policy during last four years. Answering questions, the Foreign Minister asserted whether it has been indicated by Defence Minister Nirmala Sitharaman or anyone else, India has never discarded the caveat on terrorism. "You cannot have talks when the entire border with Pakistan is being turned into a hot-spot. There is no change in our stand because when we lose lives on the borders, the talks cannot be held."