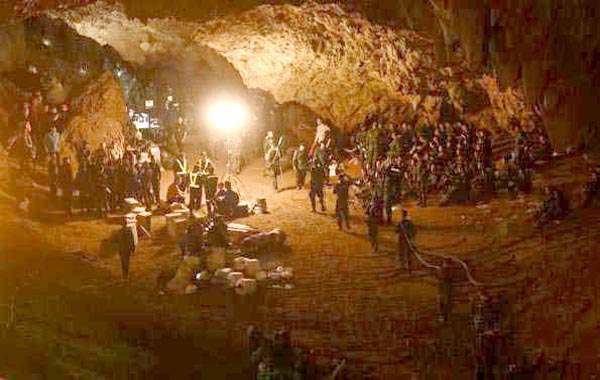 Bangkok, In Thailand, the team of divers is expected to resume the mission on Monday to rescue the remaining eight boys and their soccer coach from the cave. Four persons were rescued Sunday from a flooded cave in Thailand where they were trapped for 16 days. The boys, ages 11-16, and their 25-year-old coach became stranded when they went exploring in the cave after a practice game. Monsoon flooding blocked off their escape and prevented rescuers from finding them for almost 10 days. The four who were rescued were taken to a hospital in Chiang Rai for evaluation. Two divers were assigned to each child to help them navigate the dangerous, narrow passageways. The next phase could begin Monday after rescue teams replenish the supply of oxygen tanks along the route. It could take two to four days complete the mission,officials said. On Friday, the death of a former Thai navy SEAL underscored the risks. The diver, the first fatality of the rescue effort, was working in a volunteer capacity and died on a mission to place oxygen canisters along the route. Chiang Rai's Acting Governor Narongsak Osottanakorn said Saturday that mild weather and falling water levels in recent days had created the "perfect" conditions for an underwater evacuation. Those conditions won't last if the rain resumes, he said. Heavy rain started falling as soon as the four were removed from the cave. Narongsak said experts told him the new rain could shrink the unflooded space where the boys are sheltering to 108 square feet. Thailand's interior minister says the same divers who took part in Sunday's rescue of four boys trapped in a flooded cave will also conduct the next operation as they know the cave conditions and what to do. In comments released by the government, Interior Minister Anupong Paojinda said officials were meeting Monday morning about the next stage of the operation and how to extract the remaining nine people from the cave in the country's north. Anupong said divers need to place more air canisters along the underwater route to where the boys and their coach have been trapped since June 23. He said that process can take several hours. He said the boys rescued Sunday are strong and safe but need to undergo detailed medical checks. Thai Prime Minister Prayuth Chan-ocha is expected to come Monday night to Chiang Rai, where nine people remained trapped in a cave.