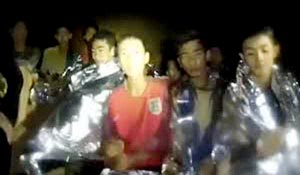 Bangkok,A new video has been released of the 12 boys and their football coach trapped in a Thai cave, in which they say they are in good health, the BBC News report said on Wednesday.Smiling and at times laughing, they each introduce themselves one by one. They were found on Monday after nine days trapped deep in the cave by rising water, and have since received food and medical treatment. But their rescue might take months, as they must either be taught to dive or wait for the water to recede.The concern is that the rainy season has only just begun, so water levels in the Tham Luang cave will almost certainly continue to rise. The video posted on the Thai Navy SEAL Facebook page shows the team draped in foil blankets to keep them warm.Lit by torches and with divers sitting alongside, they each give their name and the traditional "wai" greeting, putting their palms together. Two other videos show the group having some light scratches treated by a military doctor. The boys are also again seen asking how soon food is coming. Written on a rock in the cave can be seen the name of the football team and of the Navy Unit involved in the rescue.Two Navy SEAL divers will be staying with the group underground from now on. Rescuers are trying to work out how best to bring them all to safety, with officials stressing that they don't intend to take any risks with the boys' safety. At a press conference on Wednesday morning, authorities said no rescue attempt would be made that day, but that conditions were perfect for a rehearsal. Water continues to be pumped out of the cave complex, and officials have said they are confident they've been able to stop more water getting in to the chamber the boys are in. Emergency teams are also trying to install a phone line so the group can talk to their families, but attempts to do so failed on Tuesday.Outside the cave, medics are staging rehearsals in case the group can be brought out soon. The boys, aged between 11 and 16, and their 25-year-old coach went missing on 23 June. It is believed they entered the cave in northern Chiang Rai province when it was dry and that sudden heavy rains blocked the exit. It is thought they could at first move through parts of the cave in dry conditions but rushing waters clogged the narrow passages with mud and debris, blocking visibility and access. They were finally reached by two British rescue divers late on Monday, nine days after they entered the caves.They were huddled on a rock shelf about 4km (2.5 miles) from the mouth of the cave.The video of that first contact was also posted on Facebook by Thai navy special forces. The boys are seen by torchlight sitting on a ledge above water, responding to the divers that all 13 were there and that they were very hungry. The Tham Luang cave complex is regularly flooded during the rainy season which lasts until September or October.More heavy rain could see water levels rise and threaten the air pocket where the group has taken refuge. Experts have cautioned that taking inexperienced divers through the dangerous corridors of muddy, zero-visibility waters would be very risky. None of the trapped boys can swim. Some of the route involves squeezing through tight gaps underwater. In parts it is too narrow to wear an oxygen tank and the exits are not visible, so it would be easy for a child to panic.Other teams are still scouring the mountainside in the hope of finding another way into - and out of - the cave.