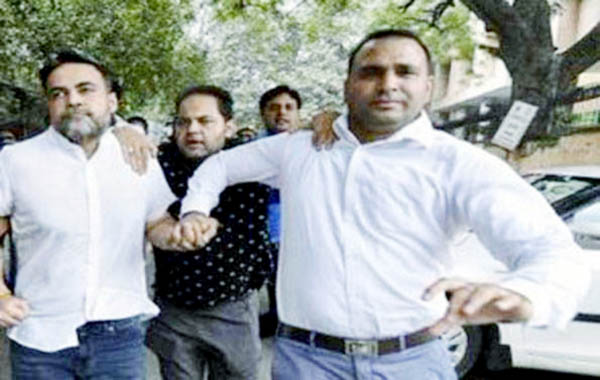 New Delhi, A city court on Monday ordered to 14-days judicial custody, Ashish Pandey, a politician's son, who was arrested on the charge of flashing his gun after a tiff at a five-star hotel in the Capital. Ashish, the son of ex-Bahujan Samaj Party lawmaker, Rakesh Jagmohan Pandey was caught on October 14, 2018, on a mobile video, flashing his gun and threatening a woman at Hyatt Regency. He and his friends were seen driving away in a luxury car and were neither stopped by the hotel staff nor by security. After some days on the run, Ashish surrendered in the Patiala House court before duty Magistrate Neetu Sharma. After the brawl, RK Puram Police Station had registered an FIR No. 360/2018 under sections 25, 27, 59 of Arms Act against Pandey jr. Police has accused the hotel authorities of a 'serious lapse' and issued a show cause notice to Hyatt Regency to explain within 15 days why it did not inform the authorities concerned on October 14 about the fracas. Counsel for Ashish Pandey submitted before the court that, due to a media trial, his client had been falsely implicated in the present First Information Report without any fault. Ashish Pandey said, 'I am being projected like I am a wanted terrorist and that the police across the nation are looking for me. I am not denying that the incident took place that night. A lookout circular has been issued against me. I learnt about this two to three days later when the video went viral. If you check the CCTV footage, you’ll find who went to the ladies toilet that night and who threatened whom.' Counsel contended before the court that nothing more was required to be recovered from Ashish Pandey and he has always cooperated with the investigating agency. Prosecution submitted that no more police custody was required of the accused at this stage.After hearing the submissions on behalf of the prosecution and defense counsel, Metropolitan Magistrate Dharmender Singh remanded Ashish Pandey to judicial custody till 2nd November.