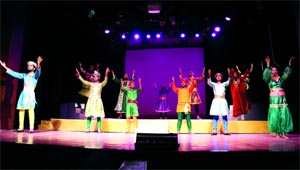 Chronicle Reporter, Bhopal The two weeks gala that 8th Theatre Olympics at Bhopal was finally culminated on a high note with an international play staged at Bharat Bhawan. Based on a series of novels written by Italian author Miguel de Cervantes during the period of 1590-1612, a play ‘Novelas Ejemplares’ was created, best on twelve of his exemplary novels. The Spanish play brought to stage The Spanish-English Lady and The Two Maidens – two novels with women as main characters and a common issue: Travelling. During the travels of these three comedians from the 17 th century, they go through a number of experiences. Each tale of these characters is drawn as a different world, with different languages and resources.