There is no substitute for mother, motherland and mother tongue 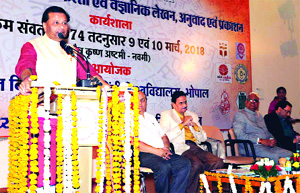 Chronicle Reporter, Bhopal Higher Education Minister Shri Jaibhan Singh Pawaiya said that there can be no substitute for mother, motherland and mother tongue. Shri Pawaiya was addressing a two-day workshop on “Hindi Bhasha mein Takniki, Chikitsa evam Vaigyanik Lekhan, Anuvad evam Prakashan”. The workshop was organized under the aegis of Atal Behari Vajpayee Hindi Vishwavidyalaya and Madhya Pradesh Council of Science and Technology. Shri Pawaiya said that Hindi is not a small language, in fact it has enormity in it. The conclusions derived from the workshop should be taken forward by reconsidering rethinking on it every three months. Language has a deep influence over an individual. Language can help float an ideology. Rajbhasha or Matrabhasha can bring about changes in people. Higher Education Minister Shri Pawaiya said that it is a cause of concern that today common man is searching for happiness in celebrations of birthdays and marriage anniversaries depending on western culture. No law or stick is needed to change the society. He said that having four berries was not enough to satisfy Lord Sri Rama’s hunger; it was only symbolic to change the society and give it a new direction. Shri Pawaiya said that the Gross Domestic Ratio is high in those 20 countries of the world who adopted their mother tongue after independence. He said that there is need to provide alternative to students. Children who answer in Hindi should also be selected during interviews. They too should get job opportunities. Shri Pawaiya said that there is need for a positive initiative for Hindi. Hindi should not be looked down upon. Chairman of Scientific Technology Terminology Commission, New Delhi Shri Avanish Kumar, Director General of Madhya Pradesh Council of Science and Technology Dr. Navin Chandra, Hindi Vishwavidyalaya Vice-Chancellor Prof. Ramdev Bharadwaj and Registrar Dr. S.K Pare were also present at the workshop.