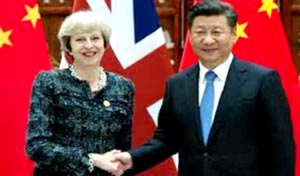 Beijing, British Prime Minister Theresa May is to meet President Xi Jinping for talks later on the second day of her visit to China, the agenda of which is expected to cover trade and security issues, including North Korea's nuclear programme. The British PM is in China at the head of a 50-strong business delegation, according to a BBC New report on Thursday.She will also raise environmental concerns -- and present Mr Xi with a box-set of the BBC's Blue Planet II series, with a personal message from presenter Sir David Attenborough. The show examined the effect of human behaviour on the environment and was referenced by Mrs May last month when she pledged to eradicate all avoidable plastic waste in the UK by 2042 as part of a 25-year green strategy. UK-China trade is currently worth a £59bn a year and Mrs May has said she expects deals worth a further £9bn to be signed during the course of her visit. One of the UK companies travelling with the PM, health-tech firm Medopad, has said it signed more than £100m of commercial projects and partnerships with organisations including China Resources, GSK China, Peking University and Lenovo. BBC political editor Laura Kuenssberg said the prime minister would want to build on the warm words from China when she meets Mr Xi, amid pressure on her from her own party and Brussels in recent days. Earlier this week, the EU set out what it was prepared to offer the UK in the Brexit transition period.Speaking in China, Mrs May sought to reassure Tory MPs worried about the length of transition, saying it would last about two years and was not "something that is going to go on and on".