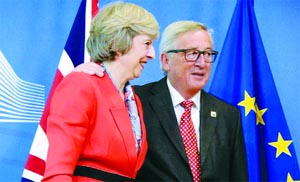 Agencies, London,  Prime Minister Theresa May is going to Brussels for her last EU summit before October, the point when both sides in Brexit negotiations hope a deal will be concluded, according to a BBC News report. But the Irish Republic’s prime minister, Leo Varadkar, has called progress so far “disappointing” and warned that “time is running out”. The EU’s chief negotiator, Michel Barnier, has said “serious divergences” remain over what to do about the Irish border and any future customs arrangement. Meanwhile, ex-prime minister Tony Blair has suggested the UK’s departure from the EU could be delayed. Mrs May holds a series of one-to-one meetings with other EU leaders today, a major focus of which will be migration challenges. She’s expected to return by Friday morning - having watched at least some of the England-Belgium World Cup match in between discussing Brexit at a leaders’ dinner tonight. The BBC’s Laura Kuenssberg says there is little expectation that Mrs May will go to Brussels with a “magic key to unlock the Brexit process”. The prime minister has also called a cabinet meeting on 6 July to work out the the UK’s future blueprint for relations with the EU. The fire on Saddleworth Moor has been raging for several days, causing the evacuation of up to 100 homes. With dry, windy conditions exacerbating the difficulties for firefighters, about 100 soldiers and an RAF Chinook helicopter have been sent in. The troops, from the 4th Battalion, Royal Regiment of Scotland, will help by managing water lines and fire beating.The helicopter will transport high-volume water pumps. Here’s the moorland fire in pictures. And we ask how to tackle a blaze of this size and type. So, no Germany. Argentina haven’t done much and Brazil have been inconsistent. Dare England fans dream, asks BBC Sport’s chief football writer, Phil McNulty. With Tunisia overcome and Panama thrashed, Gareth Southgate’s team take on Belgium, their first world-class opponents of this World Cup, at 19:00. While we’re at it, here is just some of the reaction to Germany’s poor performance. Exactly a year to the day that I’d first been struck, a storm was brewing outside my house. I was at home because I still couldn’t work. My psychologist had encouraged me to face my fears and not hide indoors during bad weather. So, I plucked up the courage and stepped on to our porch.Then… I felt it. That same flash of light, that same agonising burning. I was thrown back into the house, where my boyfriend David rushed to my side. Before I lost consciousness, I was sure I was going to die.