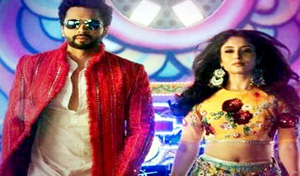 New Delhi, The first song from 'Mitron' titled 'This Party Is Over Now' sung by Yo Yo Honey Singh has created a lot of buzz since it's release. This song is a refreshing anti-party number which has garnered more than 40 Lakh views in less than 24 hrs and becomes one of the Top 10 most viewed songs in the world. The upbeat number features the dapper Jackky Bhagnani and the gorgeous Kritika Kamra. Jackky’s swaggering style and cool dance moves amplify the energy of the song. It is quite unlikely for Honey Singh to come up with a song title that shifts from his genre of music. His recent live video on the social platform, reveals the reason for such a title. In the live video, Honey Singh said, "My songs like 4 Bottles Vodka have been criticized as the song indicates the epitome of frivolousness, so this is a new revolutionary sober song for all as it says This party is over now." The 'Mitron' teaser and trailer have been receiving a lot of praises from fans. The audience has loved the humour in the film, the bond the three friends share (played by Jackky Bhagnani, Pratik Gandhi and Shivam Parekh), the quirky banter between the father and son (played by Neeraj Sood and Jackky Bhagnani) and the inherent fun vibe of the film. TV sensation, Kritika Kamra, who makes her debut with this film, has also been unanimously loved as well. Starring Jackky Bhagnani, Kritika Kamra, Pratik Gandhi, Shivam Parekh and Neeraj Sood, 'Mitron' promises to be a hilarious roller coaster ride. 'Mitron' is slated to release on September 14.