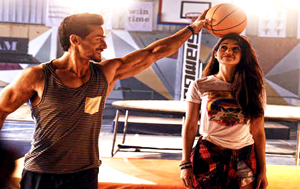 New Delhi, The refreshing pair of Sajid Nadiadwala's 'Baaghi 2', Tiger Shroff and Disha Patani remind director Ahmed Khan--the super hit pair of Ranbir Kapoor and Deepika Padukone. Sajid is all set to bring together one of the most anticipated couples of Bollywood, Tiger and Disha for the upcoming action film 'Baaghi 2'. The effortless chemistry of the two actors has got the audience excited to witness the couple on silver screen. The poster featuring Tiger and Disha got everyone sweating with their smoking hot chemistry. Further to the poster, the songs 'Mundiyaan', 'O Saathi' and 'Lo Safar' elevated the interest of the audience to know more about the love story in the film.The chemistry of the leading pair has received much love from the audience further increasing the excitement for the film. Just like the audience, director Ahmed Khan too is impressed with his leading duo and finds similarity between Tiger-Disha and Ranbir-Deepika. He said, "I am impressed by their confidence. Tiger and Disha bring outstanding freshness on screen. I haven’t seen it for a long time. It takes me back to the days of Ranbir and Deepika’s amazing chemistry in their early days in Bollywood.” Revealing details about the chemistry of the couple, Ahmed said, "Tiger and Disha are friends but during the workshops I ensured that I broke the comfortability they shared with each other because that was important for the film. Initially they would joke around with each other, but then I ensured that they spoke to each other differently. This is not a regular love-story and I needed this kind of energy from my leads. Baaghi 2 at the end of the day is the journey of a woman".While Tiger was already cast for the sequel of 'Baaghi', Disha Patani came on board much later. Talking about Disha Patani, the director said, "Tiger was already on board, but we still hadn’t zeroed in on the girl. Disha was supposed to do the first film in the franchise. I decided to do some workshops with her. I realised that she had immense drive. Also, she is hugely popular on social media. So we decided to cast her in 'Baaghi 2'." Tiger and Disha had earlier wooed the audience with a dance video titled 'Befikra' which garnered immense love and appreciation from audience across all quarters. The film also features Manoj Bajpayee, Randeep Hooda and Pratiek Babbar in pivotal roles. Co-Produced by Fox Star Studios and Sajid Nadiadwala under the banner name Nadiadwala Grandson Entertainment, 'Baaghi 2' is directed by Ahmed Khan and is slated to release on March 30.