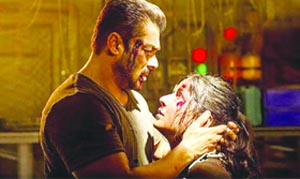 Filmmaker Ali Abbas Zafar’s latest venture ‘Tiger Zinda Hai’ has witnessed a magical run at the Box Office which is still going strong. Fans have showered their love on the film and Box Office figures are solid proof of the same. Tiger Zinda Hai happens to be Ali and Salman’s second successful film together after ‘Sultan’. Noted film critic and trade analyst Taran Adarsh took to Twitter and shared the latest figures. The film not only emerged as one of the top grossers of 2017 but also proved to be Salman’s third venture to cross Rs 300 crore milestone. The actor’s last three big hits in the Rs 300 crore club happen to be Bajrangi Bhaijaan, Sultan and Tiger Zinda Hai respectively. Tiger Zinda Hai is directed by Sultan helmer Ali Abbas Zafar. The film had some kickass action stunts performed by the lead pair which will keep you on the edge of your seats. Hollywood fame stunt master Tom Struthers was roped in for adding an international touch to all the action scenes in the film—and it certainly paid off to be the right decision. Salman and Katrina’s on-screen pairing once again proved to be the best so far.