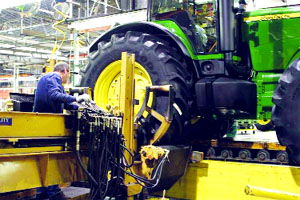 Agencies, Bengaluru Sale of tractors in domestic market continued to witness an upswing with a volume expansion of 19.4 per cent on a year on year basis. According to rating agency ICRA though the growth in Agriculture Gross Value Added during FY2018 is projected to moderate from previous years’ levels, partly due to decline in crop yields following an uneven monsoon precipitation, the tractor industry’s volume growth had not slowed down, with favourable crop cycles, on the back of two consecutive near normal monsoons, leading to an improvement in farm cash flows. Additionally, increased haulage demand from usage of tractors in construction activities, as investments in infrastructure creation picked up across country,coupled with various Government of India’s support programmes, has boosted demand. While there continues to exist variations in growth across regions, a majority of the regions have recorded a moderate to healthy growth in volumes, helping the industry volumes touch a new peak (on pan India basis) in the current fiscal. According to Anupama Arora, Vice President and Sector Head, Corporate Sector ratings, ICRA Ratings, “The government’s continued thrust on promoting rural development and farmer welfare in the Union Budget continues to augur well for the farm sector, with the budget laying significant emphasis on the government’s endeavour to double the farmers’ income by FY2022. The success achieved in implementation of a mechanism to ensure healthy minimum support prices to farmers, would remain critical in helping protect the interests of the farmers and reduce vulnerability to commodity cycles. The focus on creating rural infrastructure through continuation of enhanced allocation to irrigation, roads, and other infrastructure, also bodes well for an improvement in the rural economy over the medium to long term and successful implementation of the various initiatives is likely to result in sustainable benefits to the farm community. This will support tractor’s demand.” Even as an improvement in non-farm income through deployment of tractors for commercial use is expected to continue to support the demand for tractors going forward, the financing availability, a key demand driver, is expected to remain healthy over the short to medium term, led by a relative moderation in delinquencies in the asset class for various non-banking financial institutions. “Over the long term, ICRA continues to maintain a long term CAGR estimate of 8-9 per cent for the industry, with the long-term industry drivers for the industry continue to remain intact. The government of India remains committed towards rural development and agri-mechanization, a critical component in improving the state of agriculture in the country. This coupled with other factors such as increasing rural wages and scarcity of farm labour is likely to aid growth in industry volumes over the long term,” Arora added.