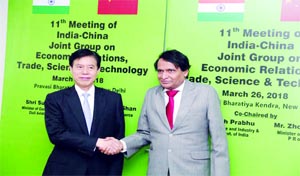 Agencies, New Delhi Commerce Minister Suresh Prabhu on Monday said addressing India’s trade balance with China was the most important issue to be taken up by the India-China Joint Group on Economic Relations, Trade, Science and Technology. Co-chairing the11th meeting of India-China Joint Group on Economic Relations,Trade, Science and Technology here with his Chinese counterpart Mr. Zhong Shan, Mr Prabhu said the joint group between India and China is the oldest and the most important dialogue mechanism between the two countries. Chinese Minister Mr. Zhong Shan welcomed Indian investment in China and promised to address the trade deficit between the two countries. Mr Prabhu also exhorted China for greater market access for agricultural products like rapeseed, soyabean, basmati and non-basmati rice, fruits, vegetables and sugar. “Another commodity which could be exported from India to China is the high quality pharmaceutical products. Export of India’s IT and IT Enabled Services (ITES) to China and cooperation in the sectors of tourism and healthcare needs to be focussed on,” Mr Prabhu added. The other issues which were discussed in the meeting included two-way trade relations, preparation of an action plan, greater focus on Regional Comprehensive Economic Partnership (RCEP) and e-dialogue. Mr. Shan said that candid and effective discussions with India on trade relations can serve as the propeller for the growth not only between the two countries but in the entire region.