Trailer of 'Namaste England' to release on Sept 6 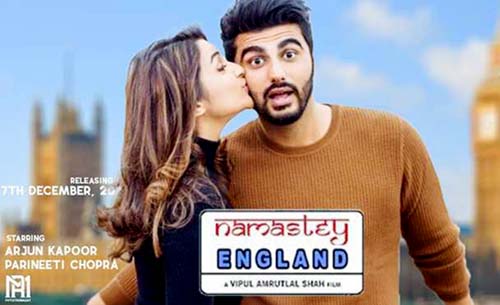 New Delhi, The trailer of Vipul Amrutlal Shah directorial 'Namaste England' is all set to release on September 6. Earlier the actors Arjun Kapoor and Parineeti Chopra confused the audience as they fought to share the release date of the trailer. While Arjun Kapoor insisted the trailer will be out on September 7, Parineeti announced September 10 as the date. However, after their fun banter, the makers finally disclosed September 6 to be the release date of the trailer. Taking forward the franchise of Vipul Amrutlal Shah's 'Namstey London', 'Namaste England' traces the love story of Arjun Kapoor and Parineeti Chopra which spans across Punjab and London. Teasing the audience with a short video, Arjun Kapoor shared a video fighting over the release date saying, "We don't believe in just informing the fans about the trailer date... We are asking YOU to guess it!#NamasteEnglandTrailer @namasteengland @parineetichopra @reliance.entertainment @penmovies #VipulAmrutlalShah #JayantilalGada @sonymusicindia #BlockbusterMovieEntertainersust". Parineti Chopra also shared a video saying, "As usual, I will be right and he will be wrong. Its ok @arjunkapooryou can start preparing to lose this bet from me. When do YOU guys think the #NamasteEnglandTrailer is coming?@namasteengland@reliance.entertainment @penmovies#VipulAmrutlalShah". Announcing the trailer date, Arjun shared another video wherein both Arjun Kapoor and Parineeti Chopra were left red faced as the trailer releases on September 6, which neither of the two predicted. Sharing the video, the actor said, "Did you figure the #NamasteEnglandTrailer launch date? It will be out soon…Watch the video to find out! @NamasteEngFilm @ParineetiChopra @RelianceEnt @PenMovies #VipulAmrutlalShah @jayantilalgada @sonymusicindia #BlockbusterMovieEntertainers". The makers of 'Namaste England' have also attained a roadblock from Zee Network as all channels of Zee network would thereby showcase the trailer on September 6 at 1900 hrs. Ahead of the film's release, 'Namaste England' has been creating immense buzz owing to the crackling chemistry of the leading duo. Arjun and Parineeti have been piquing the interest of the audience with their fun banters and adorable chemistry.The actors will be seen collaborating for the second time after the actors' debut film 'Ishaqzaade'. Vipul Amrutlal Shah’s 'Namaste England’ is a young and refreshing story that traces the journey of two individuals Jasmeet and Param. It tracks their love story across the landscapes of India and Europe. Starting from Punjab and moving to Ludhiana, Amritsar, Dhaka and all the way to Paris followed by Brussels and finally to London. It’s a fun quintessential Bollywood film starring Arjun Kapoor and Parineeti Chopra. The flick is scheduled to hit the theatres on October 19.