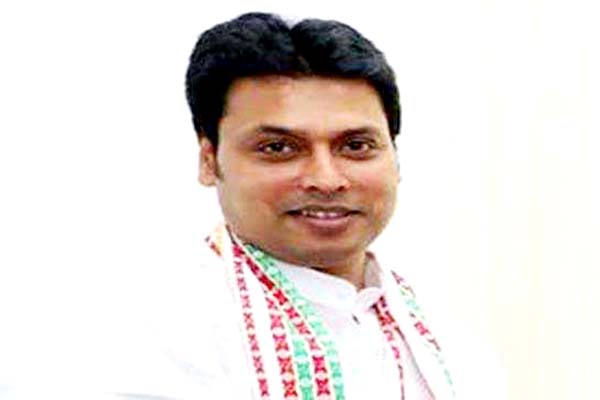 Agartala, Tripura Chief Minister Biplab Kumar Deb to attend CMs meeting at Rashtrapati Bhawan on May 2 next for interaction with the President of India in presence of Prime Minister Narendra Modi on Gram Swaraj Abhiyan (GSA) during his four day visit to Delhi to begin from tomorrow. Talking to media last night Deb said that he might have to go to Bangaluru from Delhi to attend the meeting of a few BJP ruled Chief Ministers of the country on May 5 next ahead of crucial Karnataka election. “As a state we have already submitted our written proposal and vision for Gram Swaraj and in the meeting I shall explain these elaborately to finalise it. I shall also get opportunity to listen to my other colleagues and senior about their perspectives and finally the words from Prime Minister,” Mr Deb asserted. Mr Deb however, stated that during his visit he is scheduled to meet external affairs minister Susma Swaraj for discussion on the contentious issues regarding Indo-Bangladesh relation and trade development matters between two countries.“We have trade relation with Bangladesh but not able to export our produces like pineapple, rubber, tea and bamboo made handicraft items directly from Agartala to Dhaka. Our products and produces are being exported to Bangladesh through Beanpole of West Bengal, which is a costly affair and not beneficial for the producers of the state. I want to raise the issue with Susmaji and get it solved for helping our people,” Mr Deb maintained.The Bangladesh government has been positive towards Tripura like India government but here only some administrative actions could help both the countries to strengthen the relationship and “my meeting with Susmaji will be on these only,” the chief minister stated. He is scheduled to meet a few more union ministers including human resource development minister Prakash Javadekar. The chief minister will also hold meeting with some other ministries regarding pushing for pending projects of the state.