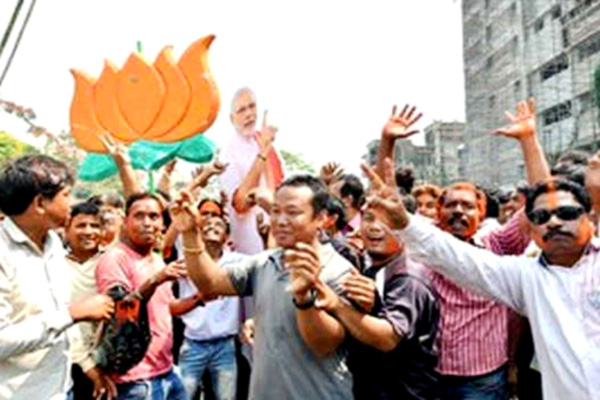 Agartala/Kohima/Shillong, The Bharatiya Janata Party on Saturday emerged a clear winner in CPI(M)-ruled Tripura, establishing convincing lead in 20 seats and having won 15 in the 60-member assembly while the scene in Meghalaya and Nagaland suggested a close fight. Communist Party of India-Marxist, which has been in power in Tripura since 1993, could so far win only seven seats and was leading in nine others. BJP's ally, Indigenous People's Front of Tripura, has secured six and was leading in two out of the nine seats it contested as part of a poll adjustment with the saffron party. In Nagaland, there has been a seesaw fight between Naga Peoples Front and Nationalist Democratic Progressive Party. BJP seems to be willing to do business with either or both. The Naga Peoples Front has won 11 and was leading in 11 while newly floated NDPP has won three and established leads in 16 others. The BJP, which fielded 20 candidates in alliance with NDPP, has so far won four and was leading in seven others. Janata Dal(United), a pre-poll alliance of NPF, was ahead in one.In Meghalaya,Congress has won 13 and leading in 8 while NPP has won 8 and was leading in 11. BJP has won two seats so far in the 60-member House.Regional players including United Democratic Party, Hill State People's Democratic Party and Khun Hynniewtrep National Awakening Movement also did well and this will in the ultimate upset Congress efforts to retain power in the hilly state. Senior Congress leaders Kamal Nath and Ahmed Patel left for Meghalaya from Delhi to explore possibilities of tie-ups with Independents and others in the state in the eventuality of a hung assembly.Union Minister Kiren Rijiju said that a "non-Congress government" is possible in Meghalaya, where Congress is desperate to retain its hold.