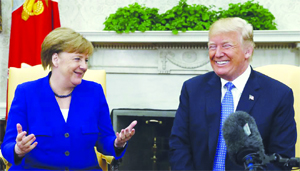 Agencies, United States US President Donald Trump and German Chancellor Angela Merkel gave a joint press conference at the White House on Friday, where they addressed the Iran nuclear deal and US trade tariffs. With Trump poised to impose tariffs on steel soon that will impact European exports, Merkel said the decision is now in Trump’s hands on whether to grant exemptions to European Union nations. “The president will decide. That’s very clear,” she said after Trump complained about the US-European trade imbalance. “We had an exchange of views. The decision lies with the president,” she said. Trump said he wanted a “reciprocal” trade relationship with Germany and other European nations and wanted Germany and other NATO allies to pay more for the common defence. “We need a reciprocal relationship, which we don’t have...We’re working on it and we want to make it more fair and the chancellor wants to make it more fair,” Trump said. The US president also said Iran will not acquire nuclear weapons but declined comment on whether he may consider the use of force against it. “I don’t talk about whether or not I would use military force. But I can tell you this, they will not be doing nuclear weapons. That I can tell you. OK? They are not going to be doing nuclear weapons. You can bank on it. “ The leaders’ last White House meeting drew attention when they did not shake hands in the Oval Office.This time round, Trump made a point of shaking Merkel’s hand twice while congratulating her on her election win. “We have a really great relationship, and we actually have had a great relationship right from the beginning, but some people didn’t understand that,” Trump said, referring to Merkel as a “very extraordinary woman.”